The Parthenon is a monument of ancient architecture, an ancient Greek temple located on the Acropolis of Athens, the main temple in ancient Athens, dedicated to the patroness of this city and the whole of Attica, goddess Athena the Virgin (Ἀθηνᾶ Παρθένος). Built in 447-438 years BC. e. architect Callicrates design Iktin and decorated in 438-431 years BC. e. under the leadership of Phidias during the reign of Pericles. Currently, in a dilapidated state, restoration work is underway.

After the end of the Greek-Persian wars, in the era of the rule of Pericles, it was decided to build a new, more magnificent and luxurious temple on the prepared site. In the construction involved the best, at that time, artists and spent huge amounts of money. The builders of the Parthenon called the ancient Greek architects Iktin and Callicrates. Researchers of the classics believe that the first belonged to the project of the building, and the second led the construction work. The great sculptor Phidias completed the decoration and, along with Pericles, oversaw the construction.

Scientists were able to accurately establish the date of commencement of construction thanks to fragments of marble tablets on which the Athenian authorities presented official regulations and financial reports to citizens of the policy. For the Athenians, such inscriptions were a means of controlling spending and dealing with embezzlement. The Parthenon was built from 447-438 BC. e. (in ancient Athens, the year began on the day of the summer solstice) for over ten years. In the first year, funds were allocated for the extraction and delivery of Penteli marble to the city. The cost of wood provided for 444-443 years BC. e., associated with the construction of the scaffolding. The fact that by 438-437 years BC. e. the statue of Athena Parthenos has already been completed by Phidias, testifies the sale of gold, which remains after the completion of works. In total, 700 talents were spent on construction (according to other sources - 469).

The consecration of the temple took place at the Panathini Festival in 438 BC. e., however, processing (mainly sculptural work) lasted until 432 BC. e.

Due to so many people asking, the first rendered image shows a cut of the Parthenon to show the inside, but the model that is for download is full and comes intact

An architecturally accurate reconstruction of the Parthenon, based on many different historical bases to be historically accurate.
The model is very detailed both outside and inside.
The model is highly detailed and comes in 3 different formats: MAX7, 3DS, and OBJ.
The MAX scene has all the material, lights and cameras set up.
The 3DS models contain the model and the cameras, with materials igned.
The OBJ model has not the materials assigned.
Renderings are made with standard 3DS Max Scanline renderer.


The magnificent temple on the Acropolis of Athens, known as the Parthenon, was built between 447 and 432 BCE in the Age of Pericles, and it was dedicated to the city’s patron deity Athena. The Parthenon sits high atop a compound of temples known as the Acropolis of Athens. Throughout the centuries, the Parthenon withstood earthquakes, fire, wars, explosions and looting yet remains, although battered, a powerful symbol of Ancient Greece and Athenian culture.

The Parthenon is the center of religious life in the powerful Greek City-State of Athens, the head of the Delian League. . it is a symbol of power, wealth and elevated culture of Athens. It is the largest and most lavish temple the Greek mainland had ever seen.The celebrated Greek statesman Pericles is credited with ordering the design and construction of the Parthenon as a temple to Athena—the goddess of wisdom, arts and literature and war.

Take a look at the above 3D model of Parthenon. This 3d model is based on a typical Parthenon created according to original dimensions. All main parts of the model are separated objects. Therefore, you can easily change all materials. We provide several formats for each model, most of them available by default. If you are in search of the same model then end your search with us. 3D artists at FlatPyramid is provide you with ready high detailed 3D models in various file formats that can be easily downloaded and used to speed and enhance your 3d modeling and rendering. 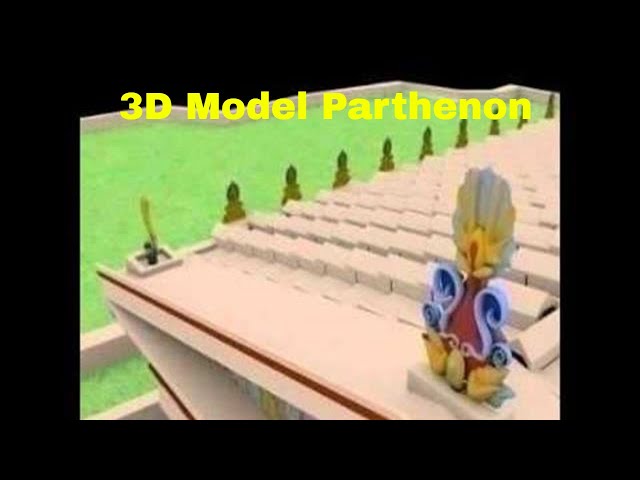