Photo-realistic 3D model of Round Diamond, Brilliant Faceting, Ideal Cut. This model of diamond presents so-called "ideal cut", mathematically calculated shape and proportions of brilliant faceting, which guarantee that light rays will not pass through the diamond but will reflect from its inner facets multiple times. The result of this are beautiful refractions with a lot of "rainbow" dispersion, that makes diamonds so pleasant to look at. Since the model provides precise proportions of "ideal cut" and accurate parameters of diamond material, the resulting renderings are the most life-like possible. Note, that all renderings of the model were made in absolutely neutral black and white studio environment. No colorful HDRI maps or colored lights were used. Also, the renderings are provided "as is", without any post-processing, enhancements and after effects.

To make the usage of the model as wider as possible, four topologies are provided:
* NURBS GEOMETRY - the initial design of the model in a CAD program using NURBS shapes. Best for using in jewelry CAD designs.
* LOW POLY - polygonal topology with minimal number of polygons retaining the diamond's shape. Best for low-poly applications and scenes, where diamonds are placed far from the camera. Not for subdivision.
* HIGH POLY - polygonal topology with number of polygons enough to present the roundness of the diamond's girdle. Best for scenes, where group of diamonds is the main subject. Also this topology is good for the render engines having option to chamfer edges at rendering time. Not for subdivision.
* CHAMFERED - polygonal topology with chamfered edges and round girdle. This topology is the most realistic presentation of real diamond, though in the cost of polygonal budget. Best for the scenes with extreme closeups of the diamond. For better result, the subdivision level 2 or higher is recommended for this topology renderings.

The Brilliant Diamond 3d model (from fr. Brillant "brilliant, sparkling") is a diamond, which, through processing, is given a special shape that reveals its natural brilliance to the maximum. Diamonds are rated according to the “4 C” system: cut (cut), clarity (purity), color (color) and carat (carat weight), which allows to determine how close the stone is to perfection.

The main thing in assessing the cutting of a stone is its quality: how much the edges are geometrically accurate and proportional. The ideal cut is encoded by the letter “A”, then - B, C, D - in descending order of quality. In the international system (GIA), the ideal cut is designated as Excellent, and in decreasing quality (Very Good, Good, Fair, Bad).

Purity is the most significant indicator of the quality of diamonds: it is expressed in the presence or absence of stone defects or foreign inclusions; A diamond without flaws is called a pure diamond.

The mass of diamonds is measured in carats: 1 carat is equal to 0.2 grams.

Most diamonds have a fluorescence - the ability to glow under the action of ultraviolet radiation.

The first forms of processing were quite primitive: they grind one of the faces and grind. In 1465, the court jeweler of the Burgundian duke, Ludwig van Berkem, made the first cut in the shape of a “rose”. For centuries, jewelers designed the perfect diamond cut, so that the light in the diamond is completely internally reflected. In 1961, Arpad Neji, who worked in this direction for 13 years, developed a new diamond cut - a profile (“princess”). In recent years, just such a form of diamonds has become very popular.

Despite the fact that diamonds take different forms after cutting, the details of their appearance can be clearly structured. The easiest way to do this is using the example of a round-cut diamond with the number of fifty-seven Cr-57 faces, due to its greater clarity.

You can clearly distinguish two main parts In this diamond: the crown and the pavilion, they are separated by the girdle. It is a kind of diamond belt separating its upper and lower parts, and is also the supporting part of the diamond, for which it is usually fixed in the product. The crown has the largest edge at the top, the so-called platform, located in the plane parallel to the girdle. Eight single wedges of the top, which adjoin the eight main edges of the crown, depart from the site. Directly next to the girdle are sixteen pair wedges that complete the overall structure of the upper part of the diamond. The pavilion is elongated and has twenty-four faces. Sixteen wedges and eight main faces of the pavilion converge at one point — the culet, the lower top of the diamond.

The most common today are round diamonds with 57 facets. For small diamonds weighing no more than 0.03 carats, along with a cut of 57 facets, a facet of 17 facets is used. Applying a facet of 57 facets began in the 17th century, but only at the beginning of the 20th century, using theoretical calculations that took into account all the physico-optical features of diamond, the ideal proportions of the faceting were obtained, allowing maximum brilliance and the ultimate play of light inside the stone. Such a faceting was called real or ideal, in it there are 33 on the top of the diamond, and 24 on the bottom. Now, a diamond facet of 57 facets is commonly used for diamonds weighing more than 0.05 carats. At the time of the USSR, the concept of “Russian cut” was introduced, which diamonds produced in Russia had to highlight, but in principle they did not propose anything fundamentally new in the cut. At the moment, the term has been preserved, but it has taken a branded hue and speaks more about the quality of processing of the diamonds produced than about the difference in terms of the structure of the stones.

In the second half of the 20th century, new, more complex forms of cutting diamonds were developed, mainly used for large diamonds of more than 1 carat. Among them are “Highlight Kat” on 73 facets (41 faces above, 32 below). For even larger stones are used: “royal” cut in 86 facets (49 facets above, 37 below) and “majestic” cut with 102 facets (61 faces above, 41 below).

Also in the second half of the 20th century, a completely new unpaired cut of diamonds - “impariant” - appeared. Its author is considered Massimo-Elbe. Instead of an octahedron, he used a diamond with 9, 11, 13, or 15 faces, which made it possible to enhance the brilliance and the play of light in the stone, forming a wider and more pleasant for sight color spectrum. The difficulty in applying this type of cut is the need for specialized equipment.

Since 2005, the Netherlands firm Gassan Diamonds under the leadership of Benno Leser (Benno Leeser), founded in 1945 in Amsterdam, has patented a facet of 121 Gassan 121 facet

Diamond 3D Model Features:
* Model provides level of details enough for close-up renders.
* Objects, groups, materials, textures in a scene have unique and meaningful names.
* Model has real world scale (system units - centimeters).
* Base of the models is at the World Origin (0,0) just above the grid.
* Model provides clean non-overlapping UVs.
* Model is completely ready for visualization.
* The exchange formats were delivered with 3 levels of mesh subdivision (if applicable): 0, 1 and 2
* Each mesh is put in a separate file.
* Model previews were rendered in 3DS Max with V-Ray renderer.

Studio lighting setup is not included. 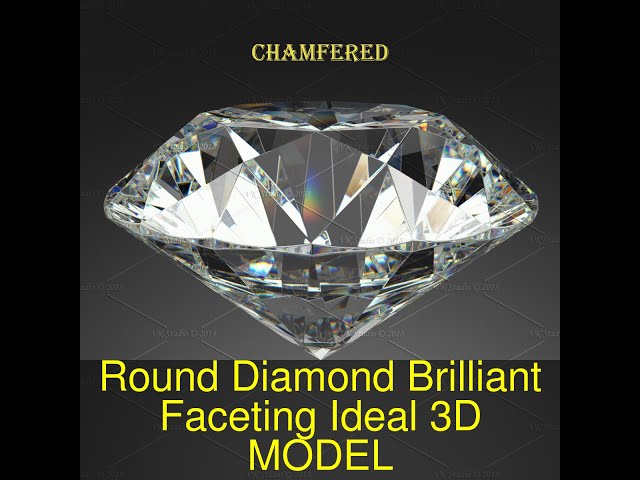