Features:
- Inside scene: -model - 29 objects - 23 textures - 2 bumpmaps
- All materials, bodypaint-textures and textures are included.
- No cleaning up necessary, just drop your models into the scene and start rendering.
- No special plugin needed to open scene.

The Special Operations Peculiar Modification (SOPMOD) kit is an accessory system for the M4A1 carbine used by USSOCOM. The kit allows special forces operators to configure their weapons to individual preferences and mission requirements.


The M4 was developed and produced for the United States government by Colt Firearms, which had an exclusive contract to produce the M4 family of weapons through 2011. The M4 carbine is a shorter and lighter variant of the M16A2 assault rifle. The M4 carbine is extensively used by the United States Armed Forces and is largely replacing the M16 rifle. The Colt Company developed various carbine versions of the basic AR-15 / M16 rifle since 1970s. These carbines were intended for all markets – military, law enforcement, civilian. The M4 has semi-automatic and three-round burst firing modes (like the M16A2 and M16A4), while the M4A1 has semi-automatic and fully automatic firing modes. The M4A1 was introduced in May 1991 with improvements. and was in service in 1994.

Colt M4A1 carbine considered the inhabitant of the M16 family. The Special Operations Peculiar MODification (SOPMOD) kit is an accessory system for the M4A1 carbine that allows Special Operations personnel to configure their weapons to individual preferences and mission requirements. M4A1 carbine with SureFire flashlight mount is a fully automatic variant of the burst firing M4. It has a maximum effective range of about 500 to 600 meters (550–660 yd). The shortened barrel length and collapsible stock combined with the 5.56mm round, makes this carbine a lethal weapon to utilize in close quarters combat. It is an ideal firearm for defending against waves of zombies in tight areas.

At FlatPyramid, we have created a model of Colt M4A1 – SOPMOD – Aimpoint with detailed and realistic view. It is highly suitable for any visual broadcast, high-resolution film, gaming, design visualization and advertising etc. The model was originally created in cinema4D but also available in 3ds, .obj, .fbx and light wave file formats. All format of this model are also available to download for commercial, non-commercial, and editorial use.

Thank you for showing interest in buying 3D model at FlatPyramid. However, if you have any query please feel free to contact us at (310) 697-3740. 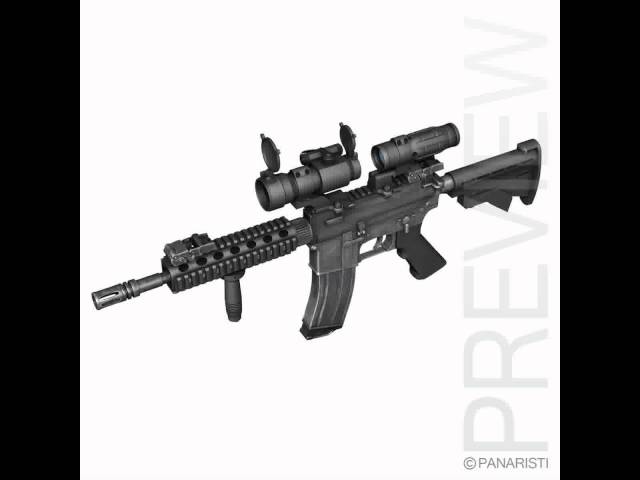