The Sd.Kfz. 251 (Sonderkraftfahrzeug 251) half-track was an armored fighting vehicle designed and first built by the Hanomag company during World War II. It began simply as an armored version of the Sd.Kfz.11 half-tracked artillery tractor.

The Sd.Kfz.11 was designed in 1938 by Hanomag and was the prime mover for the 105 mm (4.13 in) LeFH howitzer and 37 mm (1.46 in) Flak 43. Sd.Kfz. 251s were the most widely produced German half-tracks of the war, with over 15,252 vehicles and variants produced by various manufacturers, and were commonly referred to simply as Hanomags by both German and Allied war partners.

A strong design feature of the Sd.Kfz. 251 was the large track area, with the characteristic slack track design with no return rollers for the upper run of track. It also had the Schachtellaufwerk system of overlapping and interleaved main road wheels common to virtually all German halftracks of the period which lowered the ground pressure and provided better traction, at the cost of much greater complexity in maintenance. There were 23 official variants, and sundry unofficial variants were available in the market. Another important thing about the Sd.Kfz.251 is that it was one of the first armored vehicles to be equipped with interleaved wheels, just like the Kettenkrad. The Sd.Kfz.251 was seen as a real improvement for infantry mobility, and added weight to the doctrine of using motorized infantry to accompany the tanks.

At FlatPyramid, we have created a high polygon 3D model of SD.KFZ 251/7 Ausf.D – Assault Engineer Vehicle originally modelled in cinema4D along with other file formats like 3ds /.FBX/.OBJ/.C4D/lwo/ with high resolution and accurate dimensions maximally close to the original. No Special plugin needed to open scene.

Thank you for showing interest in buying 3D model from FlatPyramid which are also available to download for commercial, non-commercial, and editorial use. Visit again, because we love to serve you. 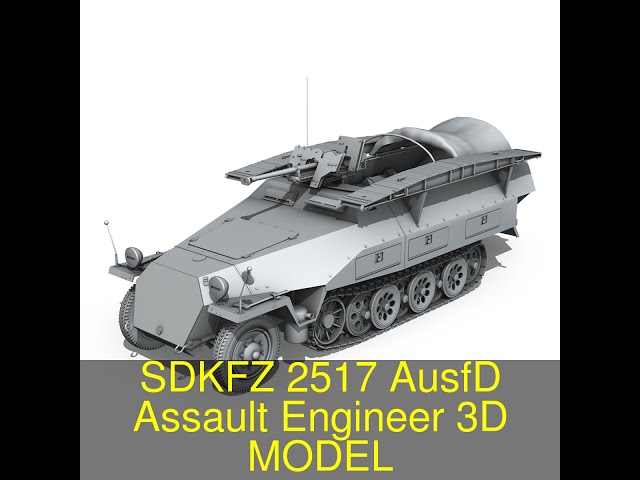