High resolution but polygon saving model was made for use in difficult architectural visualisations and animations or movies and do not increase dramaticaly total polygon count in complete scene. It has xpresso in c4d format, that is ONLY animated, on door and steering wheel, handled by sliders. Wheels are revolving automatically according to speed and movement direction. Suspension is keeping wheels always on track. Just align to spline, define terrain and have fun! Environment scene where the car is placed is not included! About 90% polygons are quads. At format *.3ds and *.max all geometry is triangular. Jointed or rigged model means hierarchy of parents and children objects. OBJ file is not jointed and contains only default grey material without any other properties. Textures are included with all files, main texture's size is 2048x2048 pixels, it can be reduced. C4D version comes with standard and Vray materials.

Audi A8 is a full-size four-door luxury sedan, which is manufactured by German automaker Audi since 1994. The A8 has been offered with both front and permanent all-wheel-drive variants. The first generation was launched with the platform of Volkswagen. Afterward, Audi released the second generation in late 2002, third in 2009 and fourth in 2017. Audi is notable for its first market car with an aluminum chassis. Audi has co-developed the construction method with Alcoa for its A8 series.

It was first introduced in February 1994 and in the Geneva Auto show. The first series cars were powered by 2.8 liters V6 Engine producing 142kW (193 PS) and a 3.7-liter V8 engine producing 171kw (233 PS). It is available with standard luxury amenities, including wood and leather interior trim, dual-zone climate control, Bose audio systems, and 14-way power and heated system. Later on, they also made changes in their front end with new larger headlights.

In 2001 Audi came up with a new W12 engine for its A8 series with a compact 6.0-liter unit. It was developed by mating two VR6 engines together at the crankshaft.

If you are looking for a high definition 3D model of Audi A8 (2010) with the detailed and fully textured interior, then your quest is completed here. You can also see various formats for rendering in the specifications lifting its value among the animators for the visualization process. We made this with ultimate accuracy, quality, and measurements. So, it may reach to the extent of your requirements.

Thank you, for buying a 3D model of Audi A8 (2010) from Flatpyramid, and visit again, because we love to serve you. 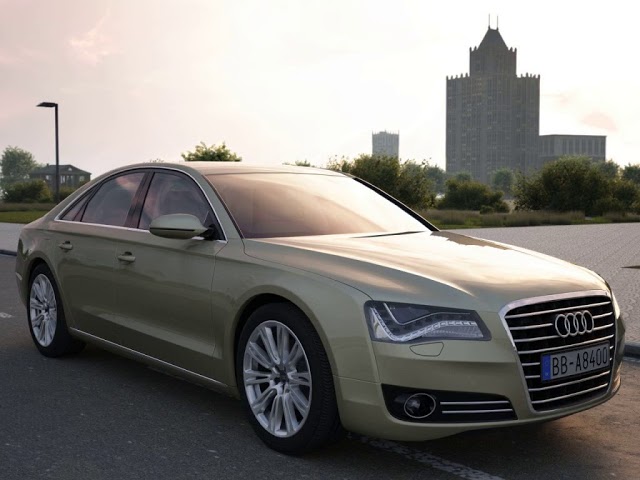