Model was made for use in architectural visualisations and animations and do not increase dramaticaly total polygon count in complete scene. It has xpresso in c4d format, that is ONLY animated, on door and steering wheel, handled by sliders. Wheels are revolving automaticaly according to speed and movement direction. Suspension is keeping wheels always on track. Just align to spline, define terrain and have fun Environment scene where the car is placed is not included About 90 polygons are quads. At format .3ds and .max all geometry is triangular. Jointed model means hierarchy of parents and children objects. If an OBJ file is available, it is not jointed and contains only default grey material without any other properties. Textures are included with all files.

Mazda Motor Corporation is a Japanese multinational automaker produced 1.5 million vehicles for global sales in 2015 alone. Mazda 2 was officially presented in 2007 and is entirely based on the same platform as the upcoming 2008 Ford Fiesta. Represented an upgraded variant of the 2002 model which now comes with lighter materials, a digital fuel gauge and air conditioning as standard, it is available with three engine configurations options, a 1.3L 75 hp, a 1.3L 86 hp and a 1.5L four-cylinder engine and 103 hp. Its clever design and careful reduction in mass pointed to a lighter, hence cleaner, and also more entertaining future for the segment. The 1.5-liter is a sweet, smooth power unit that works well with the slick-shifting five-speed manual.

Dual front airbags and antilock brakes (ABS) with electronic brake distribution (EBD) are standard. Electronic stability control (ESC) became standard on Australian variants from May 2010. ESC was available on some variants prior to then. Intelligent seat belt reminders are fitted to both front seats.

The Mazda 2 now has a surprising agility, but the entire car is set up more for utility than sportiness. Quick steering (2.2 turn’s lock-to-lock) with electric assist gives a reactive feel, and there is a pleasing precision about the way the car turns into corners and tucks in if you lift off the throttle. Unlike others, where most of the world’s small cars get larger and heavier with each iteration, the Mazda 2 is actually at least 220 pounds lighter than its predecessor-an upright, undistinguished five-door hatchback. At a claimed 2100 pounds, the Mazda 2 is about 250 pounds less than its competitor Yaris, the lightest car in a May 2006 comparison test of economy cars.

At FlatPyramid Mazda 2 3D Model was made for use in architectural visualizations and animations purpose that do not increases dramatically the total polygon count in complete scene. It has xpresso in c4d format, that is ONLY animated. Models are created accurately in real units of measurement, according to the original dimensions in several formats. We are happy to serve you in 3D Model and hope they will be of useful to you. 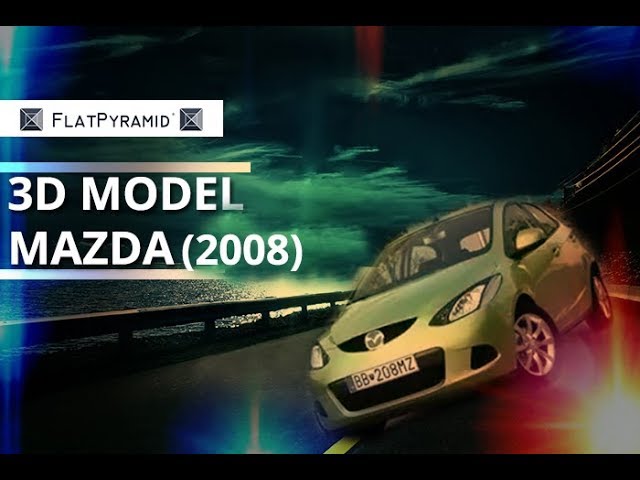