High resolution but polygon saving model was made for use in difficult architectural visualisations and animations or movies and do not increase dramaticaly total polygon count in complete scene. It has xpresso in c4d format, that is ONLY animated, on door and steering wheel, handled by sliders. Wheels are revolving automatically according to speed and movement direction. Suspension is keeping wheels always on track. Just align to spline, define terrain and have fun! Environment scene where the car is placed is not included! About 90% polygons are quads. At format *.3ds and *.max all geometry is triangular. Jointed or rigged model means hierarchy of parents and children objects. OBJ file is not jointed and contains only default grey material without any other properties.

The T model of the Mercedes E class was first released in 2009 Frankfurt Motor Show. Its design looks very aggressive and angular, unlike its predecessors. Mercedes gave the rear haunch a bulge that they named Ponton in the honor of Ponton Cars from the fifties and early sixties. The character line of the E-class was inspired from the S-class. The door handles, wheel extensions and the bumpers, all these designs were taken from the S-class.

Mercedes did a little bit of revamping for the interiors giving extra spacious cockpit, front seats with height adjustability. It also gave power side mirrors, power door locks, heated mirrors and remote window operations. Some woodwork has been done on the doors, centre console and the dashboard. The inside rearview mirror is electrochromatic The interior is equipped with an abundance of electronically advanced devices, like the FM, CD/DVD player and Bluetooth wireless data link for hands-free phone.

The 2010 E-class won a rating of five out of five in terms of occupant safety, pedestrian safety and assistance systems in EURO NCAP test.

If this car happens to draw your attention and you are now looking to use it in animations or things like that, we at Flatpyramid have designed a 3D model of Mercedes E class T model (2010). The 3D model has been designed to be used in architectural visualizations, animations, TV and movies. We have developed the model with much precision and detailing. We tried to give it a look as close to the real one as possible. We have designed the 3D model keeping in mind every detail of the car. The model is available in all formats.
Thanks for purchasing the 3D model of Mercedes E class T model (2010) from FlatPyramid. 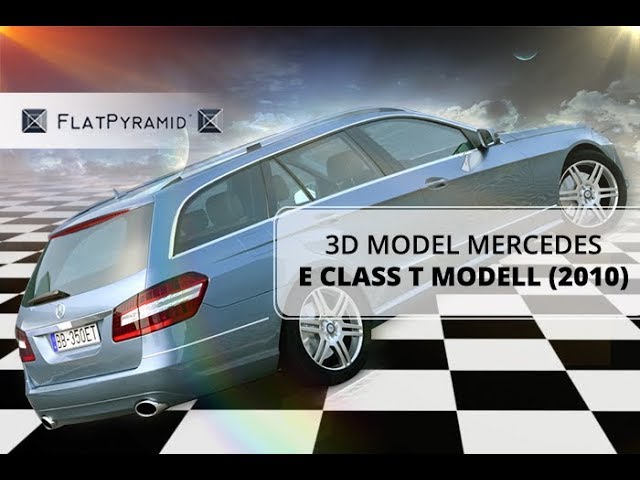