Model was made for use in architectural visualisations and animations and do not increase dramaticaly total polygon count in complete scene. It has xpresso in c4d format, that is ONLY animated, on door and steering wheel, handled by sliders.

Wheels are revolving automaticaly according to speed and movement direction. Suspension is keeping wheels always on track. Just align to spline, define terrain and have fun Environment scene where the car is placed is not included About 90 polygons are quads. At format .3ds and .max all geometry is triangular.

Jointed or rigged model means hierarchy of parents and children objects. If an OBJ file is available, it is not jointed and contains only default grey material without any other properties. Textures are included with all files.

Jaguar XJ6 is produced by British automobile manufacturers Jaguar cars (Now owned by Tata motors. India), whereas Jaguar XJ6 (1972) is a vintage, classic and luxury car of the early ’70s. The xj6 uses 2.8 liter (2,792 cc (170.4 cu in)) and 4.2-litre (4,235 cc (258.4 cu in) engine of straight six cylinders versions of jaguar renowned XK engines. Despite the engine, other main assemblies were taken from the older version of the jaguar’s IRS unit. The version was marketed under the Daimlers brand.

The car features leather upholstery and power-assisted steering and air conditioning was also offered on the 4.2 L Daimler versions, which were launched in October 1969. In 1970 Borg-Warner model 8 automatic transmissions replaced the earlier 4.2-liter XJ6 with a Borg-Warner Model 12 unit. The minor changes were also introduced into the updated version such as moving the rear reflectors from beside to below. In the interiors, the chrome gauge bezels were also replaced with the black color option to eliminate the distracting reflections.

As you can see from 3d model specifications of Jaguar XJ this, you can use it for projects where you need it. This is a high definition 3d model and it’s fully textured so use it for your close-ups and visualizations where a high-level detail is needed.
It’s various formats and XSI rendering increases its versatility in terms of its occupation in the designing world.
Thank you for buying FlatPyramid truck Jaguar XJ.
Visit again, because we love to serve you. 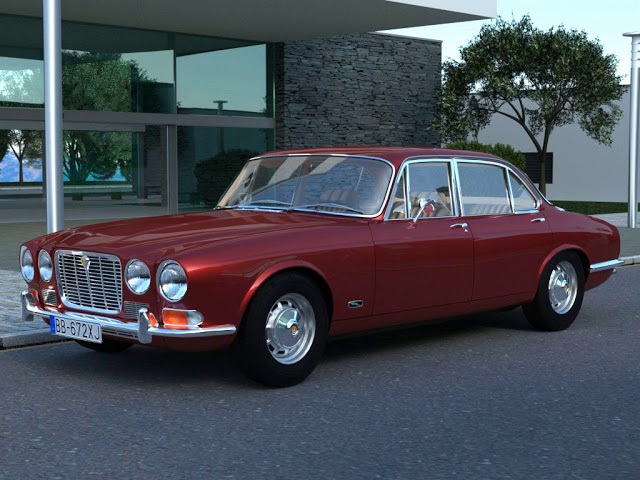