The truck's high detail exterior and interior are great for close up renders and the undercarriage has enough visible parts for close range shots.

The model was created with 3DS Max 2016 using the open subdivision modifier which has been left in the stack to adjust the level of detail.

FBX, OBJ and 3DS files have been included in separated HI and LO subdivision versions.

Elements are logically named and grouped so they can be separated to adjust to your needs.

The model contains quads and tris (no N-gons).

Scale/transform is set to 100%, units are set to centimeters, texture paths are stripped and and it is made to real world scale.

Renders were made in 3DSMax with V Ray and have no post processing.

Product is ready to render out of the box only in 3DSMax.

Lights and cameras are not included.

The model has diffuse, bump and specular maps+materials . The pickup entire body, interior and tires have been textured, the rest has materials.

All materials and textures are included and mapped in all files but they will render like the preview images only in the 3DSMax version with VRay, there is also a standard material version included, in the rest of the files they might have to be adjusted depending on the software you are using. Textures are in JPG format with 2048x2048 and 1024x1024 resolutions.

A pick-up truck is a lightweight truck with enclosed car and an open cargo area with low sides and tailgate. In the 1950s, consumers began purchasing the pickup truck for lifestyle reasons. Full-sized SUVs and pickups are an important source of income for GM, Ford and Fiat Chrysler Automobiles, accounting for two-thirds of their global earning. Pick up trucks account for 18% sale of total vehicles sold in the United States.

In the early days of automobile manufacturing, vehicles were sold as a chassis only, and third parties added bodies on the top. In 1913, the Galion Allsteel Body Company installed hauling boxes on slightly modified Ford Model T chassis. In 1925, Ford followed up with Model T based, steel-bodied, half tonne with an adjustable tailgate and heavy-duty rear suspension.

In 1980s, the compact Mazda B-series, Isuzu Faster, and Mitsubishi Forte appeared. As a result, American manufacturers had to build their own compact pickups for the domestic market.

To further enhance its beauty, FlatPyramid has developed a high resolution 3-D model of a Generic Pickup Truck. The model has been developed with precision and detailing. I can be used in visualizations, animations, movies etc. We hope that you like it.

Thanks for showing interest in 3-D model of a Generic Pickup Truck. 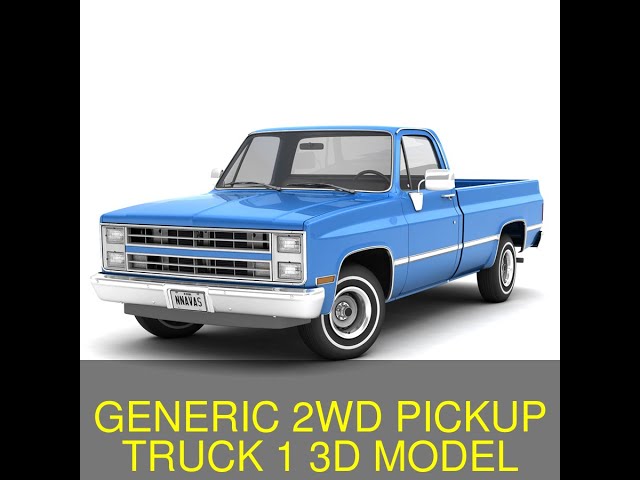