Behind the Scenes: Angry Panda

Behind the Scenes: Angry Panda

Hi! My name is Grigoriy Ischenko, and I’m a freelance 3d artist. I’m living in the Rostov-on-Don (it’s in southern Russia). I am a self-taught artist. Since my childhood, I dreamed of becoming a 3D artist after I saw the cinematics of the StarCraft. It was very impressive for me (it was the year 1997). I was a 12-year-old. I started learning LightWave studio and some later 3ds Max. But I grew up and had no opportunity to study the preferred profession, then I went to university for Architecture.

After graduation, I got a job as an architect. In time I came to realize that architecture is too boring for me and it was then that I met Blender (it was the year 2013). It was very strange to me that it was a free program with so many powerful features. I was interested and I started learning. And I loved the Blender. In the process of learning, I did many things for fun, especially when I felt inspiration (like this). After some time I started selling my models in the Unity Asset store. I’ve earned a profit and left my job. I became free.

Now I have occasional requests for remote work. And I’m using only Blender to sculpting, modeling, and animations.

There was a little weekend-long competition, “Speed Sculpting”, in a social network. The competition had about 10 participants and no prizes. As an assignment, we received a sketch by Maxim Verehin (famous CG artist). You can see this sketch at the top right corner of my screenshot below.

I really like the new Blender 2.8, but I’m still using version 2.79 – it’s more stable and the interface is more comfortable for me.

I started with a basic mesh and skin modifier to make the first basic shapes. After that I turned ON dynamic topology and just started sculpting. 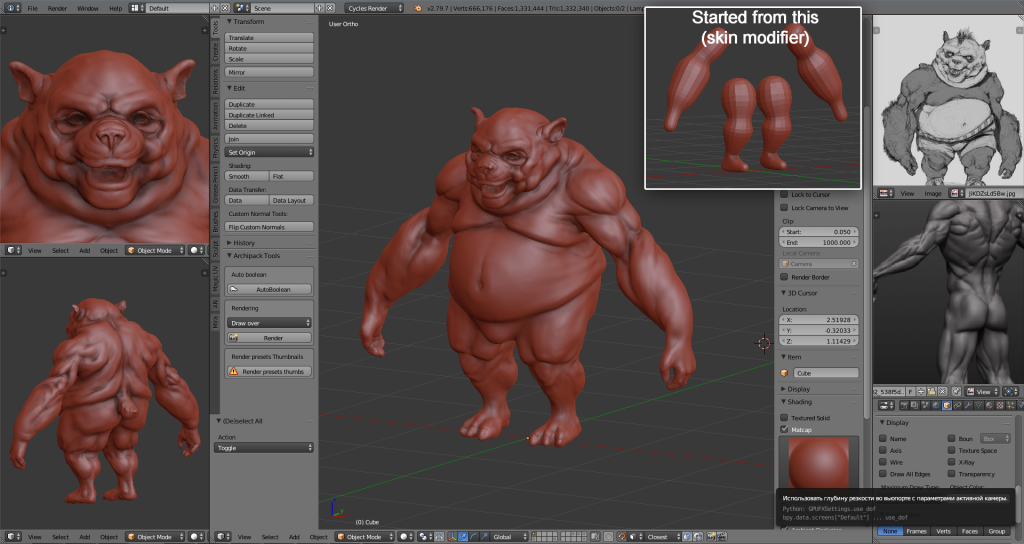 Next I made a retopologized mesh by hand without any addons. But I used ShrinkWrap modifier. 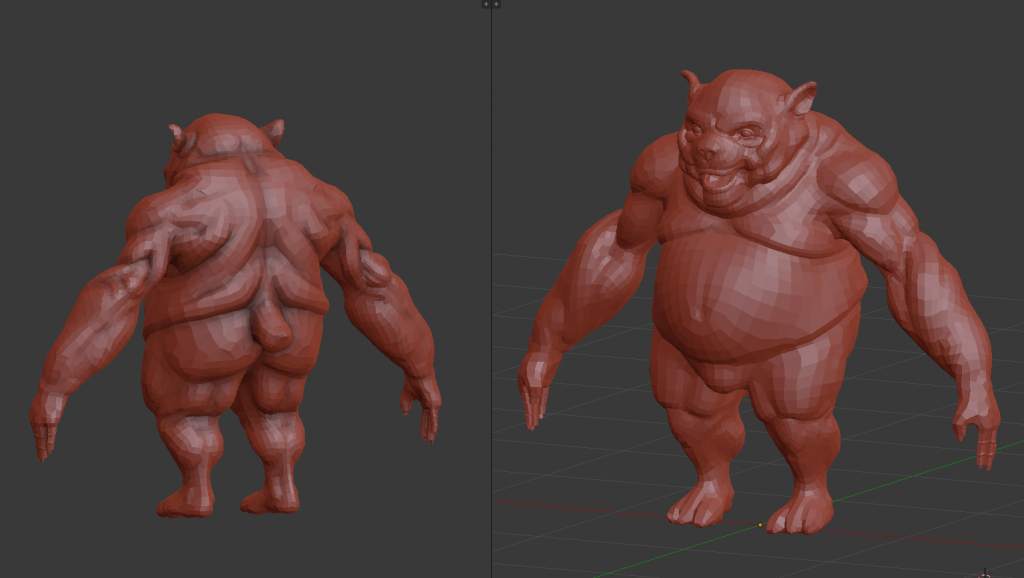 For the pants, I just copied part of the retopologized mesh, gave it thickness, and added multiresolution and sculpted it.

Next, I created an armature and changed the pose of the character. 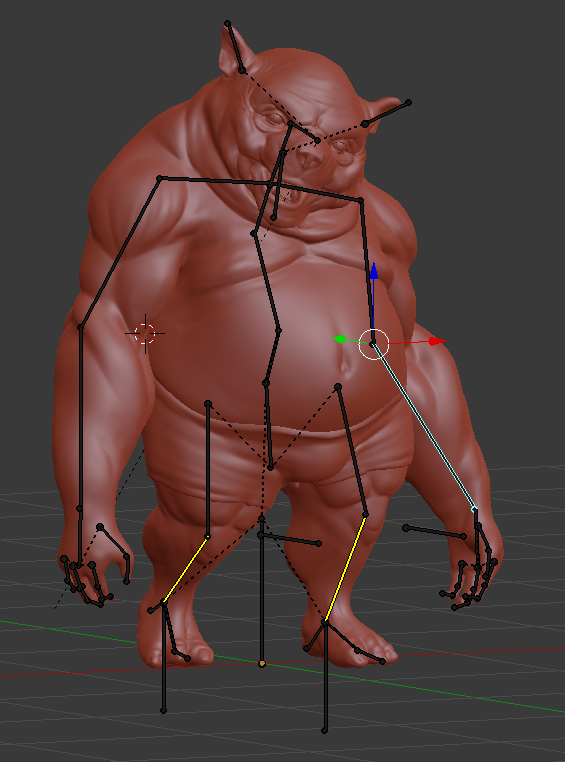 Then I added a Multiresolution modifier and cointinued sculpting.

By the way, Retopology and Multiresolution sculpting allow me to get a smoother and neater surface.

And finally I made a shader for coloring the sculpt. I used the principled shaders for all materials.

I painted vertex color and added these colors to nodes.

You can see lighting process in this pic:

And to finish, I decided to make hair and fur, like in the reference, using a very easy and regular method. I made two vertex groups: one for density and the second for the length of hair.

And the hair shader was very easy too. I again used vertex color.

Final result. (The background was added in Photoshop.) 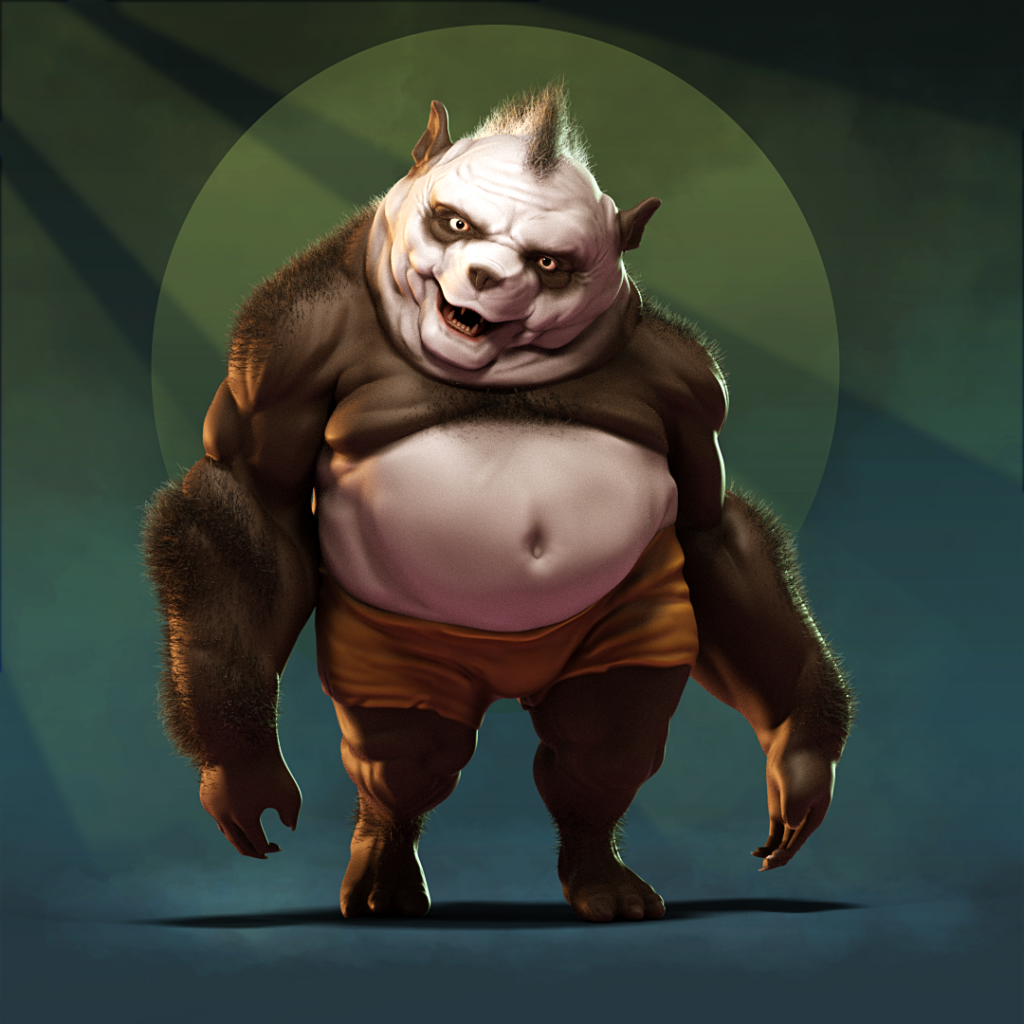