Created and Rendered With Blender

The first cylinder was made by hat dealer John Gettington in 1797, but cylinder was only popular in 1820. Men put on cylinders for celebrations and business meetings, there were even some of the troops wearing them; they soon became an everyday attribute of the middle class suit in Europe and America. In those years, cylinders were made in different styles with variations in color, material, and shape. For example, the tall cylinder, which was always worn by US President Abraham Lincoln, also allowed him to put inside letters, financial papers, bills and notes. In 1823 in France, the cap was invented - a folding cylinder.

Initially, the cylinders were made of beaver felt, expensive and rare material, which led to their high price and availability only to the highest strata of the population. Hence the association of cylinders with wealth. In the manufacture of felt, mercury preparations were used, which caused chronic poisoning of hat masters, accompanied by characteristic dementia, from which the concept of “mad hatter” came. In the middle of the XIX century, in connection with the almost complete extermination of beavers, the hats switched to other methods of production.

Cylinders are now made of very soft silk plush, glued to a rigid base of several layers of gauze, glued with shellac. The seams that attached the top and the fields to the crown hid under a pile of plush. The cylinder has acquired a characteristic luster in a silk version, hats made of felt did not shine. Cheaper versions of the cylinder, which were often worn by postmen, chimney sweeps and policemen, were usually made of felt or oilcloth. The skeleton of the hats, worn for hunting and riding, was no longer made of gauze, but out of durable canvas, and gave a good protection to the head.

At the end of the XIX century, cylinders began to go out of fashion, gradually giving way to kettles, more comfortable for urban life and mass production (unlike them, the cylinders were handmade by experienced hat masters). From everyday use cylinders completely out after the First World War. In the 1920s – 30s the cylinder was worn exclusively on solemn occasions (parties, public ceremonies, funerals, weddings). It is worth noting that among parts of the big bourgeoisie and politicians in Western Europe, the cylinders continued to remain an element of the toilet until the end of the 1930s. Diplomatic etiquette regulated wearing a cylinder until the 1970s.

At six feet four inches tall, Lincoln towered over most of his contemporaries. He chose to stand out even more by wearing high top hats. He acquired this hat from J. Y. Davis, a Washington hat maker. Lincoln had the black silk mourning band added in remembrance of his son Willie. No one knows when he obtained the hat, or how often he wore it. The last time he put it on was to go to Ford’s Theatre on April 14, 1865.

At FlatPyramid, we have developed a high resolution 3-D model of an Abraham Lincoln Hat. This is a Realistic 3d model with Texture. Created and Rendered With Blender. Given below i mention important features of my product.

It is available in 3ds, max formats for commercial, non-commercial and editing purposes. The design can be used in any project. These models are used in difficult architectural visualizations, animations, movies or games. If you are in search of the same model then end your search with us. 3D artists at FlatPyramid is provide you with ready high detailed 3D models in various file formats that can be easily downloaded and used to speed and enhance your 3d modeling and rendering. 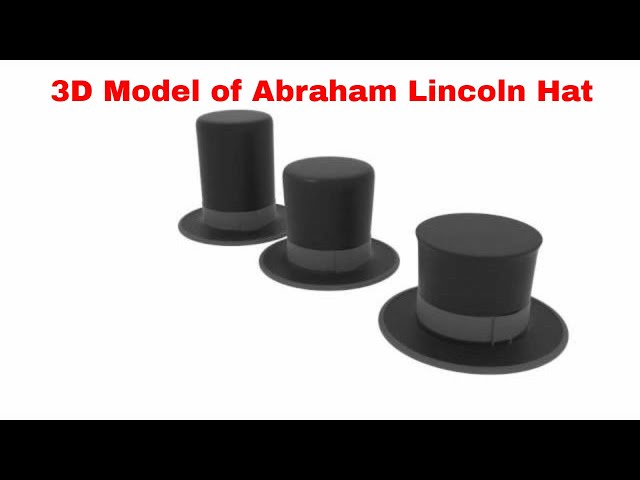