-All object are named.

-All materials are named.

In mechanical engineering, metal structures are usually understood to mean parts made of profiled metal, as opposed to cast parts and forgings.

In construction, the term "building metal structures" describes load-bearing steel building elements of a building made of metal.

Until the beginning of the 20th century, cast iron metal constructions were mainly used in construction (mainly in columns, beams, stairs, etc.). Modern metal structures are divided into steel and from light alloys (for example, aluminum).

Typical applications
enclosing elements (fences, fencing) and in the form of decoration parts of buildings,
bridges, supports of something, spans, arrows, floor beams, frames for reinforced concrete structures, pile frames,
tower cranes, bridge cranes, which are based on MK,
blast furnace frames
gas holders
tanks
masts
power transmission towers,
light metal structures (LMK) - metal structures used for the construction of buildings with large spans,
light steel thin-walled structures (LSTK) - building structures of cold-formed galvanized profiles.
Known metal objects
The dome of St. Isaac's Cathedral in St. Petersburg with a diameter of 22 meters.
The Eiffel Tower is a 300-meter tower in Paris, the capital of France.
Shukhov Tower - a television tower made in the form of a bearing steel mesh shell. Located in Moscow on the street Shabolovka.
Turning Torso is a skyscraper in Malmö, Sweden, located on the Swedish side of the Öresund Strait.
Skyscraper Mary-Ex - a 40-story skyscraper in London, the capital of Great Britain, the design of which is made in the form of a mesh shell with a central support base.
The Golden Gate Bridge - the largest suspension bridge in the world from its opening in 1937 until 1964 through the Golden Gate Strait, connects the city of San Francisco in the north of the San Francisco Peninsula and the southern part of the Marin County, near the suburb of Sausalito.

Many homes nowadays have some type of gates or fencing surrounding them. As we know , there are a number of options available such as vinyl, wood, aluminum, etc. when it comes to material for your fencing and gates, iron gate is considered the best among them because it offers many benefits. All in all, iron gates and fencing is definitely a good choice. if you are looking for something that can give your home a high level of security, elegance, and privacy then iron gates are the best option for you. Iron gates has many different designs are available in nowadays

At FlatPyramid, we have developed a high resolution 3-D model of an Iron Gate. This is a Realistic 3d model with Texture. Real-world scale and exact proportions. Model is centered at 0,0,0. All materials are named. As you can see the model looks like the thumbnails.Detailed enough for close-up renders.

It is available in 3ds, max formats for commercial, non-commercial and editing purposes. The design can be used in any project. It is one of the most detailed models of an Iron Gate that you will come across on the web. These models are used in difficult architectural visualizations, animations, movies or games.

Download this 3D model from FlatPyramid at the best price available online. Feel free to contact us anytime to inquire and chat about 3d models, rendering and any questions about using 3d models for your project..

Thank you for showing interest in a 3D model from the FlatPyramid.

Reach out to us again anytime you need 3d models, because we love to help you and serve you. 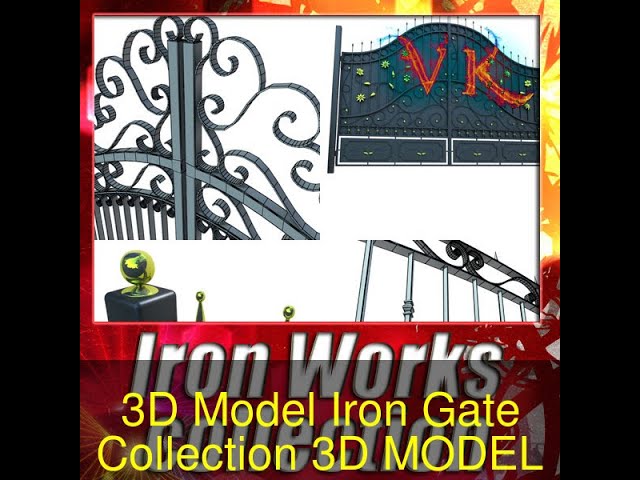