Cheetah, one of the world’s most-recognizable cats, known especially for its speed. In other words we can say that the cheetah is the world’s fastest land mammal. These big cats are quite nimble at high speed and can make quick and sudden turns in pursuit of prey.

Gestation (pregnancy) period for the cheetah is 93 days. There are three stages in the life cycle of the cheetah: cub (birth to 18 months), adolescence (18 to 24 months) and adult life (24 months and on). The cheetah is the world’s fastest land animal and Africa’s most endangered big cat. Uniquely adapted for speed, the cheetah is capable of reaching speeds greater than 110 kilometers per hour in just over three seconds. At top speed, their stride is seven meters long. The cheetah’s unique body structure: flexible spine, semi-retractable claws, long legs and tail allow it to achieve the unbelievable top speed of 110 km/hr (70 mph).

Cheetah diet consists mainly of gazelles, especially Thomson’s gazelles. They also take on impalas and other small to medium-sized antelopes. Sometimes, too, they prey on the calves of larger animals. There are multiple file formats of this model is available as mentioned in the specification section so it can be used with any of the supporting rendering software.

FlatPyramid has developed a high resolution 3-D model of cheetah. It can be used in various areas such as visualizations, animations etc.

Thanks for showing interest in the 3-D model of cheetah. We hope that you like it. 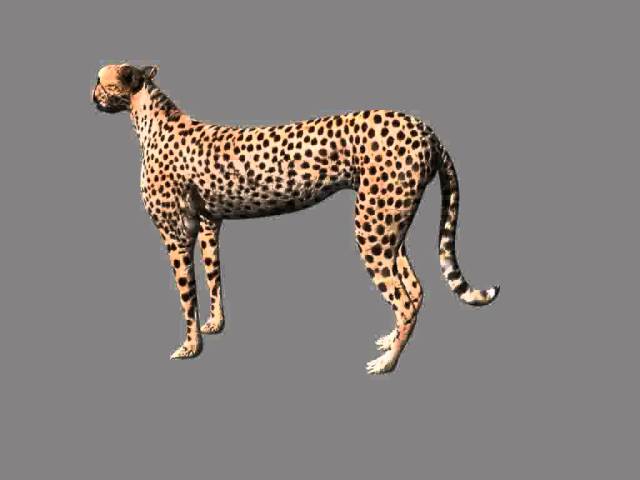