The Jeep Wrangler is a series of compact and mid-size (Wrangler Unlimited and Wrangler 2-door JL) soft-top/hard-top body type, four-wheel drive off-road SUVs, manufactured by Jeep. Currently Jeep Wrangler (JK) is in the third generation of Jeep. It is also known as one of the world’s best-known vehicles. Calling itself the Wrangler JK, its redesign was also the debut of a 4-door model called the Unlimited, which was over 20-inches longer than the 2-door, and would go on to become extremely popular. Compared with the old Wrangler, code-named TJ, the 2007, dubbed JK, is taller, longer, 5.5 inches wider, rides on a 2.0-inch-longer wheelbase, and boasts a dizzying list of performance, comfort, and safety upgrades–many of them clearly intended to boost the on-road appeal of this hardest-core of Jeeps.

The 2007 JK Wrangler also displays a host of safety features including standard four-wheel-disc brakes with ABS, and an electronic stability system with new rollover mitigation technology, which can pulse individual brakes in an attempt to prevent impending rollovers. The increased dimensions of the exterior pay off in the cabin, where front-seat occupants enjoy more overall space, rear-seat passenger’s benefit from an added inch of legroom, and everyone can make use of a rear cargo area that’s more than doubled in size. It had better ground clearance, larger wheels and tires, enhanced axles, updated Command-Trac® and Rock-Trac™ transfer cases, electric axle lockers, and an electronic disconnecting front sway bar that increased wheel travel. Safety was also increased with the help of electronic stability control and roll mitigation, dual-stage air bags, and seat-mounted side air bags.

At FlatPyramid, we have created a high polygon 3D model of Jeep Wrangler Rubicon in .C4d format with high resolution and accurate in real units of measurement, qualitatively and maximally close to the original.

Thank you for showing interest in buying 3D model of Jeep Wrangler Rubicon (2007) from FlatPyramid which are available to download for commercial, non-commercial, and editorial use. 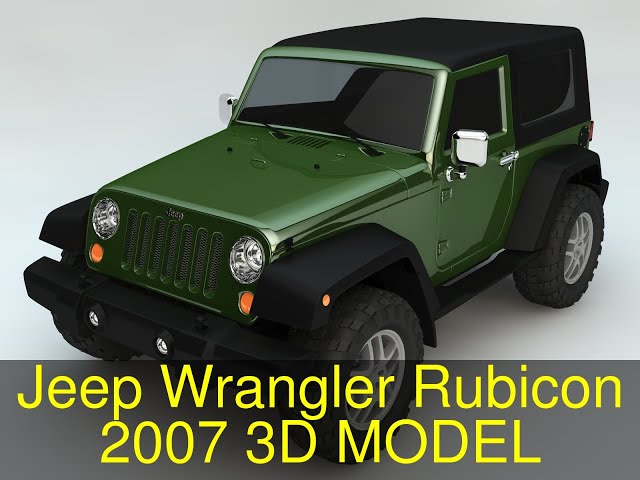