This is a highly detailed Velociraptor  3D model or Deinonychus dinosaur.
This is a subdivision or cage model designed to render at a subdivision of two using the catmull-Clark subdivision algorithm.
The topology has been created with believable deformations in mind.
At a subdivision of 0, the skin contains 9626 triangles, the teeth contains9632 triangles, and the finger and toe nails contains 4608 triangles.
Included with the model are the following texture maps:
2048X2048 diffuse map,
2048X2048 Bump map and a
2048X2048 normal map.
All the preview renders have been done in Softimage XSI 7 using mental ray.
Please note that materials and lighting is only included in the XSI version of this model.

Velociraptor (Latin Velociraptor; from Lat. Velox - fast and raptor - hunter) - a genus of carnivorous two-legged dinosaurs from the dromaeosaurid family, the subfamily velociraptorin. Type species - Velociraptor mongoliensis. He lived at the end of the Cretaceous, 83-70 million years ago. His remains were first discovered in the Republic of Mongolia. In Chinese Inner Mongolia, the species V. osmolskae was found. The velociraptor was significantly smaller than the largest representatives of its subfamily: the dacotaptor, uutaraptor, and achillobator - but also possessed a number of progressive anatomical features.

Like most theropods, the velociraptor had four fingers on its hind limbs, one of which was underdeveloped and did not participate in walking, and (like theropods) stepped on three fingers. Dromerozavridy, including Velociraptor, used only two: the third and fourth. On the second was a large, strongly curved claw that grew to 67 mm in length (on the outer edge). He was previously considered their main weapon for killing and tearing up victims. However, later it was experimentally confirmed that these claws did not use the velociraptor as blades (since their inner curved edge was rounded, and the sharp tip did not pierce the animal's skin, but only pierced it); most likely, they served as hooks, with the help of which the predator clung to its prey and held it, sometimes, perhaps, even piercing the animal’s trachea or cervical artery.

Much more important weapons in the velociraptor’s arsenal were probably jaws with sharp teeth. The velociraptor skull had a length of up to 25 cm, was stretched and bent upwards. On the upper and lower jaws, 26-28 teeth each, with serrated cutting edges, spaced at intervals and bent back to grip and tear prey. Biomechanically, the lower jaw of the velociraptor resembled the jaws of a Komodo's monitor lizard and was thus well suited for tearing pieces off relatively large prey. Based on the anatomy of the jaws, the once-proposed interpretations of the velociraptor lifestyle as a hunter of relatively small prey seem unlikely.

The forelimbs of the velociraptor had three fingers each. The first was the shortest, and the second - the longer.

Do you ever wanted a Velociraptor model? Here it is! We have built it in a blender and ringgit.

Velociraptor is one of the world’s most well-known dinosaurs. It is a genus of dromaeosaurid theropod dinosaur that lived approximately 75 to 71 million years ago during the latter part of the Cretaceous Period. A large Velociraptor was six feet long, two feet tall, and 50 pounds. Marginally larger than a turkey, and with a much longer tail.

It is smaller than other dromaeosaurids like Deinonychus and Achillobator, Velociraptor nevertheless shared many of the same anatomical features. It was a bipedal, feathered carnivore with a long tail and an enlarged sickle-shaped claw on each hindfoot, which is thought to have been used to tackle and disembowel prey. Velociraptor can be distinguished from other dromaeosaurids by its long and low skull, with an upturned snout.

If we are talking about its diet than alone velociraptor could have killed and eaten animals like lizards, early mammals and small or young dinosaurs. In a pack, Velociraptor may have hunted even larger prey such as Homalocephale, a pachycephalosaurus meal that was definitely on a Velociraptor’s menu was Protoceratops.

This 3D model was created on real base. It’s created accurately, in real units of measurement, qualitatively and maximally close to the original.The model is provided combined, all main parts are presented as separated parts therefore materials of objects are easy to be modified or removed and standard parts are easy to be replaced.Thank you for choosing FlatPyramid as your first option for 3D models. 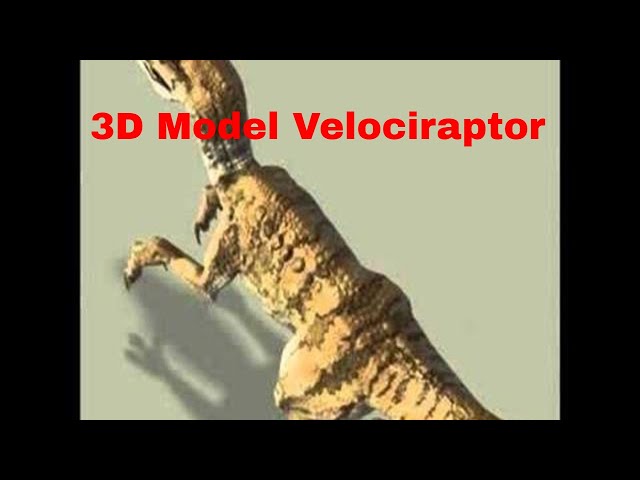