6 types of sushi food with all material and textures included.
polygonal
polygon 139755
vertices 139383

Sushi is a Japanese dish prepared with vinegared rice, usually with some sugar and salt, accompanying a variety of ingredients, such as seafood, vegetables, and occasionally tropical fruits. In sushi, rice is the main player here. Styles of sushi and its presentation vary widely, but the one key ingredient is sushi rice, also referred to as shari, or sumeshi.

It is traditionally made with medium-grain white rice. But, it can also be prepared with brown rice or short-grain rice. People generally consider sushi nutritious and healthy. Sushi is a seaweed roll filled with cooked rice, raw or cooked fish, and vegetables. It’s commonly served with soy sauce, wasabi, and pickled ginger. Sushi first became popular in 7th-century Japan as a way to preserve fish.

Sushi is often regarded as a health food because it boasts several nutrient-rich ingredients like: Fish is a good source of protein, iodine, and multiple vitamins and minerals. Wasabi paste is often served alongside sushi. As its flavor is very strong, it’s only eaten in small amounts. Nori is a type of seaweed used to roll sushi. It contains many nutrients, including calcium, magnesium, phosphorus, iron, sodium, iodine, thiamine, and vitamins A, C, and E.

Sushi contains a large number of refined carbs. This can make you more likely to overeat and may increase your risk of inflammation, type 2 diabetes, and heart disease. This 3D model of sushi with ingredients available in various 3d file format please check from its specification.

Thanks for choosing the FlatPyramid for 3D model services. 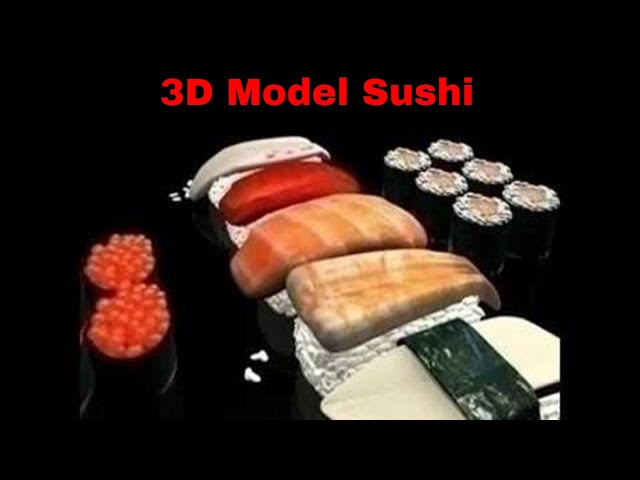 Category: Other Cookware and Tableware