Cutaway elements of ground stockage of spent nuclear fuel.
Elements made for a newspaper infographic.
Only cinema4d R10 has materials and textures. Other formats zip files have only landscape ground texture and buildings textures enclosed.
Polygons 3865
Vertices 3595
If you like the model please rate it.

The possible barriers to nuclear power derived from experimental data. It’s set through the barrier for nuclear motion and penetration. Barriers to specific incident particles differ markedly. This is shown that even the heights of barriers to alpha-particles increase with the atomic number, and also that the nuclear radius at the top is equivalent to the atomic mass cube root.

It is measured for corresponding neutron barrier radii, and the radioactive elements are in agreement with those provided by Dunning and Gamow. It is proposed that the motivation operating in collisions with alpha-particles is only a second-order force and that the variations in proton barriers are due to an important first-order force much further below their tops.

Cutaway ground storage elements of spent nuclear fuel and these elements have made an infographic for a newspaper. Nuclear barrier bombs are extremely deadly weapons. In animation images, our model just uses a demo.

At FlatPyramid, we have designed a 3D model of a Nuclear Barrier. Our 3d model appears like a unique nuclear model. This is a Realistic 3d model with Texture. This model can also be used for a variety of applications such as drawing, animated films, ventures, instructional aim, film making, and much more, the model is best for you. Thank you for choosing my product! If you have any queries regarding the product please contact us directly to get preferential. 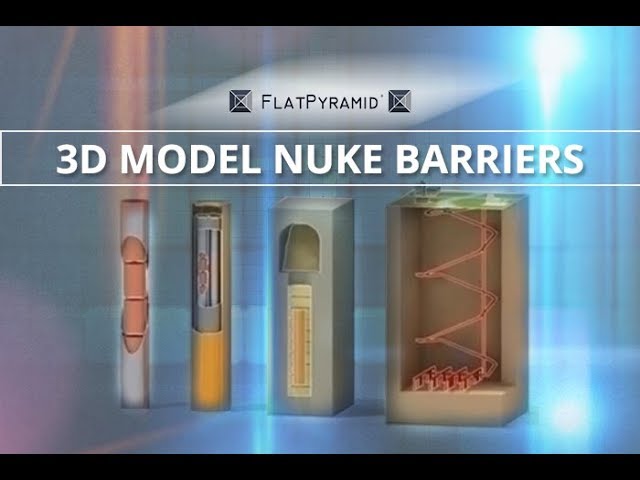