The Type 052C destroyer NATO code name Luyang II class, often referred to as Lanzhou class after the lead ship name is a class of destroyer built by the People's Republic of China.

The Chinese Navy DDG -171 Hatakaze-class of guided missile destroyers appeared during the early 1980s to form a group of two-strong surface vessels. It is also referred to as Haikou Type 052C destroyer (NATO Code Name Luyang II within the Chinese Navy. It launched on 30 of October 2003 and commissioned into service in late 2005. It is currently active in the People’s Republic of China South Sea Fleet. The Type 052C class is preceded by Type 052B (Luyang Class) multi-role destroyer and succeeded by Type 052D destroyer with two sorts of radars which were active electronically scanned array (AESA) and have vertically launched surface to air missiles into PLAN service making it the first PLAN warship with area air defense capability. The Type 052C appears the same basic hull design as the Type 052B destroyer, but it is incorporated with Stealth features.

The Type 052C destroyer is armed with eight 6-cell vertical launch systems (VLS) firing indigenous HQ-9 air-defence missiles. Chinese Navy DDG-171 carries 48 HHQ-9 naval Surface to air missiles with the utmost range of 55 nautical miles and Two triple 324 mm (13 in) torpedo tubes along with 100mm PJ-87 gun. This fully automatic gun can engage surface and aerial targets such as aircraft and low speed missile. It has a maximum rate of fire of 90 rounds per minute.

The destroyer has a stern helicopter deck and hangar which can accommodate a Ka-28 ASW helicopter which carries torpedoes and depth charges, and have the capability to be operated in all weather conditions. This Chinese Navy DDG-171 destroyer is loaded with newly developed Electronic Counter Measures (ECM) system using phased array jammers to supply active and passive jamming capabilities to the vessel.

At FlatPyramid we have created a realistic 3D model of Chinese Navy DDG-171 in various format like 3D Studio Max file .Max/.3ds/.obj/.fbx file format which are also available to download for commercial, non-commercial, and editorial use. One can use these models in movies, gaming, and animation and in other projects as well.

Thank you for showing interest in buying 3D models from FlatPyramid. In case of any queries, please feel free to contact. 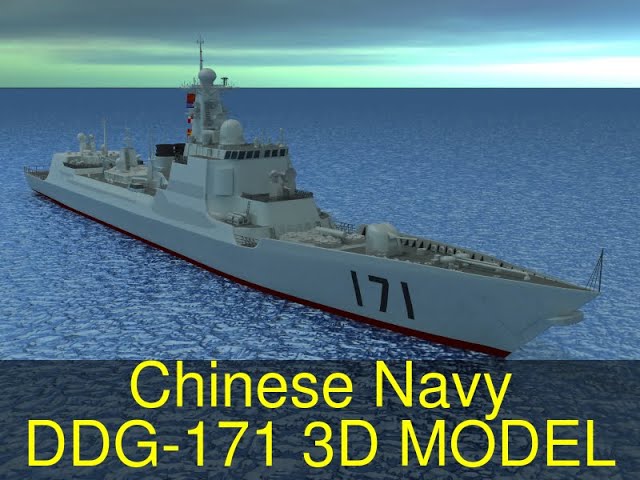