Chocolates are a confectionery product based on cocoa butter, which is a product of the processing of cocoa beans - chocolate tree seeds, rich in theobromine and caffeine.

The product is widely spread throughout the world, becoming one of the most popular types of food; It is often used in cooking. Chocolate is part of a large number of products - mainly dessert, such as cakes, puddings, mousses, chocolate cakes and cookies. Many sweets are filled or coated with sweetened chocolate; also hard chocolate bars and chocolate coated bars are eaten as a snack. Chocolate as a gift comes in various forms (for example, in the form of a heart symbol) and is traditional on some holidays, such as Easter and Valentine's Day. In addition, chocolate is used in hot and cold beverages such as chocolate milk and hot chocolate.

The homeland of chocolate, like the cocoa tree, is Central and South America. The Mayan Indians, and then the Aztecs, for many centuries mixed ground and roasted cocoa beans with water, and then bitter pepper was added to this mixture. The result was a bitter, spicy, high-fatty frothy drink that was drunk cold.

In Europe, cocoa drink has been known since the 1520s; the first of the Europeans was tasted by the conquistador Hernan Cortes. Instead of cold and bitter, this drink in Europe turned into hot and sweet by the beginning of the 17th century. Despite its popularity, the high cost of raw materials limited the consumption of hot chocolate to a fairly narrow circle of the most affluent people.

The modern period in the history of chocolate was discovered by the Dutchman Konrad van Guten, who patented in 1828 an inexpensive way to squeeze cocoa butter from grated cocoa. This discovery made it possible to create solid chocolate, which gradually supplanted liquid chocolate from the diet of Europeans. It is believed that the first slab chocolate was produced in 1842 in Bristol (United Kingdom), but a year earlier, the French pastry chef Jean Pietra had already received solid chocolate.

In 1875, Daniel Peter from Vevey, after many unsuccessful experiments, finally managed to add the first milk chocolate to the number of ingredients; Soon the production of this product was established by its partner, Henri Nestlé. After another 4 years, another Swiss, Rodolphe Lindt, was the first to master the conching of chocolate. These discoveries made it possible for Swiss confectioners to become fashion trendsetters in the chocolate industry for a long time.

Chocolate is one of the most popular food types and flavors in the world, and many foodstuffs involving chocolate exist, particularly desserts, including cakes, pudding, mousse, chocolate brownies, and chocolate chip cookies. Chocolate is a usually sweet, brown food preparation of roasted and ground cacao seeds that are made in the form of a liquid, paste, or in a block, or used as a flavoring ingredient in other foods.

Children like chocolate because kids are sweet and chocolate is sweet in taste too. Such sweet people love sweet chocolate. Chocolate is cool stuff to eat! Kids don’t see chocolate as junk food. It is easily available to buy and more often get it as a gift from parents and friends. If your child is having problems with his math homework, chocolate may be the answer to his problem. Chocolate contains flavanols, which are known to increase blood flow to the brain.

Chocolate has gained a bad reputation and is considered to be a potential cause of diabetes. But dark chocolate is loaded with soluble fiber and many essential minerals like zinc, iron, magnesium, and copper. It is also a great source of energy and a moderate amount can give a much-needed boost. In chocolates, you’ll find a variety of flavors with something for everyone. The box includes almond caramel, midnight delight, intense dark, cocoa rush, dark hazelnut crush, simply almond, intense caramel, mocha gianduja, and more.

In the specification section, you can see various file formats of the Chocolate model. If you are looking for a high definition 3D model with a detailed and fully textured interior, then your quest is completed here. You can also see various formats for rendering in the specifications lifting its value among the animators for the visualization process. Thank you for choosing FlatPyramid as your first option for 3D models. 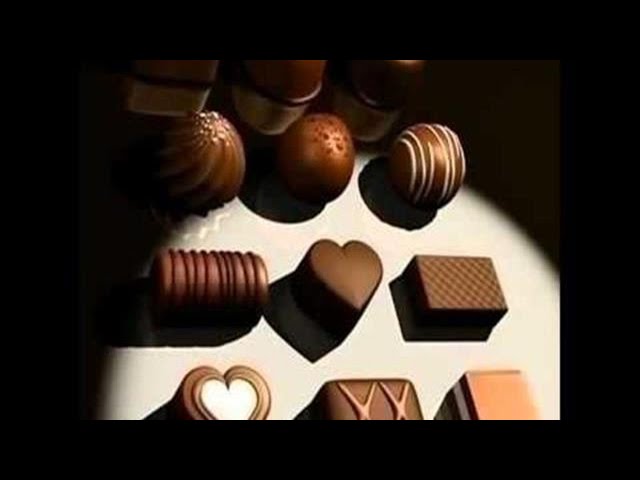