Detailed model of Leonardos mechanical drum
Rendered with C4D.
All materials and textures are included,but it could need some texture reassigning.Material enclosed for c4d only.
Polygonal
Polygons 23502
Vertices 26568

The drawing is a cart equipped with a mechanical drum. When pulled or set in motion by a handle, the gears turn the two lateral drums which are fitted with pegs (cams). These pegs, which can be placed in various positions, move ten sticks (five on each side) that beat the large drum on the back. Changing the position of the pegs alters the rhythm of the music.

Leonardo da Vinci was one of the noted artists of the high renaissance. Fifteen artworks are generally attributed either in whole or in large part to him. However, it is believed that he had made more only for them to be lost or remain unidentified. The authorship of several paintings traditionally attributed to Leonardo is disputed.

One of the most noted design by Leonardo Da Vinci was the mechanical drum.

A drum is a member of the percussion group of musical instruments. Drums consist of at least one membrane, called a drumhead r drum skin that is struck over a shell and struck.

Drums may be played individually, with the player using a single drum, and some drums are almost always played in this way. Others are normally played in set of two or more, all played by one player.

Several factors determine the sound a drum produces, including the type, shape and construction of the drum shell, the type of drumhead it has, and the tension of these drumheads.

Da Vinci’s mechanical drum was designed to entertain the guests of one of his employers.

At FlatPyramid, we have developed a high resolution 3-D model of the mechanical drum. It is available in different formats for commercial, non-commercial and editorial purposes. The design can be used in any project. It is one of the most detailed models of the mechanical drum that you will come across on the web. We hope you like it.

Thank you for showing interest in buying 3-D model of the mechanical drum. 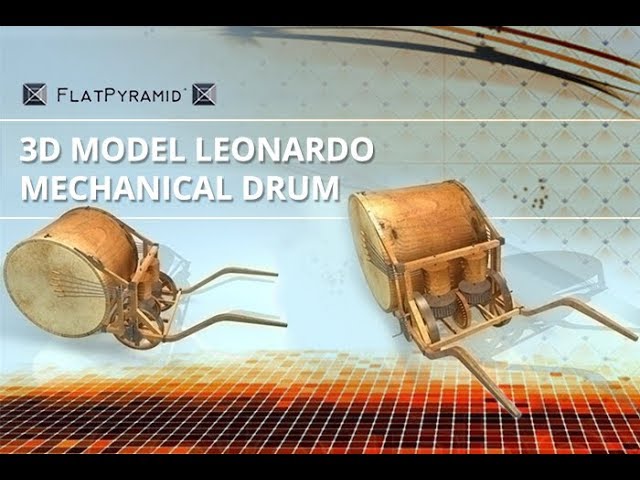