The central panels of a helicopter or aircraft are designed to achieve the maintained and controlled aerodynamics of flight. It helps to transmit mechanically to rooters to operate the aircraft. It also includes an FMS (Flight management system), which is a specialized computer that regulates a wide-variety of functions of in-flight tasks. It uses various sensors placed in the helicopter and controlled through the cockpit of the helicopter. All this is connected through a CDS (control display system) which possesses a small screen and keyboard or touch screen.

The Central panels of two promising air craft’s Mi-8 and M-17 is an example of the best engineering.

About the aircraft, the Mil Mi-8 is a medium twin-turbine helicopter, which was originally designed by the Soviet Union, now Russia. Its reporting name was ‘Hip’. The most commonly, it was used as a transport helicopter, but when required, it was also given an airborne command, reconnaissance missions with the armed gunship. Along with Mil Mi-17, it falls in the list of the most-produced helicopter in the world.

To give you the real thrill factor of using these central panels in your visualization process. The FlatPyramid has come up with the fully textured, detailed and high-resolution 3D model of Mi-8MT Mi-17MT Central Panels Board English.

The model is available in different formats and ready to use.

Thanks for purchasing the 3D model of Mi-8MT Mi-17MT Central Panels Board Russian from FlatPyramid. 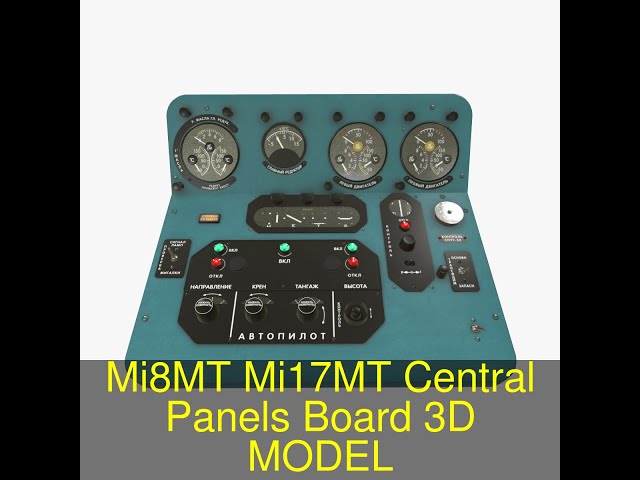