The Mil Mi-8 is a medium twin-turbine transport helicopter available with armed gunship versions, originally designed by the Soviet Union now by Russia. Developed from the basic Mi-8 airframe, the Mi-17 was fitted with the larger Klimov TV3-117MT engines, rotors, and transmission developed for the Mi-14, along with fuselage improvements for heavier loads.

The Mi-17 can be recognized because it has the tail rotor on the port side instead of the starboard side, and dust shields in front of the engine intakes. Russian armed forces call it Mi-8MT
These are available in numerous variants, including the Mi-8T, Basic updated version of the Mi-8T, powered by two 1,397 kW (1,874 hp) Klimov TV3-117MT Turbo shaft engines. The export version is known as Mi-17. This can carry 24 troops with rockets and anti-tank guided missiles. The Mil Mi-17 export version is employed by around 20 countries; its equivalent in Russian service in the Mi-8M series. The only visible difference between the Mi-8 and Mi-17 is that the tail rotor is on the starboard side (right side) of the Mi-8, whereas in Mi-17 it is on the port side.

At FlatPyramid Originally created with 3ds Max 2015 this realistic 3d model of Left Overhead Panels Board of Helicopter Mi-8MT / Mi-17MT has triangular and quadrangular polygons. The model is available with prints in Russian language as well.

Thank you for showing interest in buying 3D models of a realistic Left Overhead Panels Board of Helicopter Mi-8MT / Mi-17MT from FlatPyramid which are available to download for commercial, non-commercial, and editorial use. 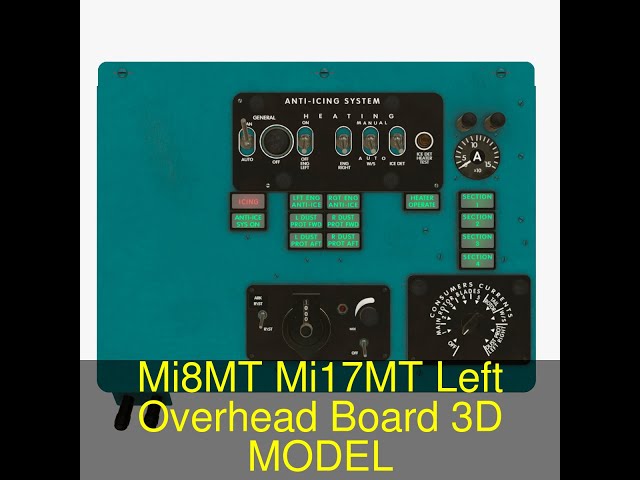