The AMC Javelin is an American front engine rear-wheel car. It is manufactured and marketed by the American Motor Corporations (AMC). Javelin was the first car to take the American Motor into the pony car market created that was created by Ford Mustang.

The Javelin debuted on August 22, 1967. It had more interior and luggage space compared to its rivals. It had adequate head and leg room and a trunk capacity of 10.2 cubic feet.

The second generation was manufactured in 1971. The new design incorporated an integral roof spoiler and sculpted fender bulges. The car’s cockpit had an asymmetrical dashboard, with functional intrument gauges.

The Javelin was built on AMC’s compact platform as a two seater hardtop model to be a dashing affordable pony car.

From 1971, the AMX was no more available as a two seater. The new Javelin AMX was loaded with several racing modifications and the AMC marketed it as “the closest you can buy to a Trans-AM champion.”

After winning the Trans-Am in 1971, 1972 and 1976 Javelins were the first pony car to be used as standard vehicle by the highway police by an American law enforcement agency because of its speed and handling capacities.

If you have ever fantasized about driving a muscle car, then FlatPyramid has come up with a 3D model of the AMC Javelin AMX 71. We have developed the model to be used in difficult architectural visualizations, animations, movies and games. We have tried to keep it as real as possible so that you can enjoy the clarity of the graphics of the car. You can enjoy a good ride just like you would on the original. The model is available in different formats.

Thanks for purchasing 3D model of AMC Javelin AMX 71 from FlatPyramid. 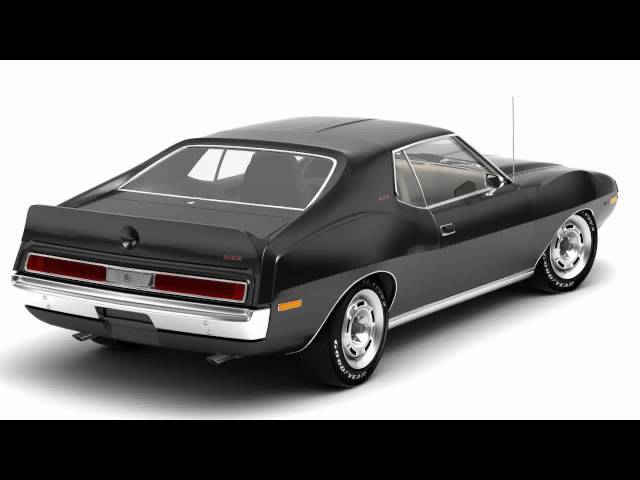