Roys Hot Rods is proud to present this HIGHLY detailed Bugatti Historic race car. This has to be one of the most detailed Bugattis youre going to find on the web. Motor, chassis, and interior details are included Free textures, and free reference photos. Special note: OBJ files done in seperate layers to make the car easier to detail.

Bugatti type 35 has been one of the most successful racing cars of Bugatti. It was phenomenal with over 1,000 wins in its time. It took Grand Prix World Championship in 1926 after winning 351 races and setting 47 records in two prior years. The Type 35 averaged almost 14 race wins per week. Bugatti won the Targa Florio for five consecutive years, from 1925 through 1929, with the Type 35.

The original model was introduced at the Grand Prix of Lyon on August 3, 1924, used an evolution of the three valve 2.0 L overhead cam straight-eight engine first seen on the Type 29.

A less expensive version of the Type 35 appeared in May 1925. Although the company given name “Type 35” was rejected by the people; they nicknamed it ‘Tecla’ after a famous maker of imitation jewelry. They said it was just a copy of the Type 35 with small engine.

The type 35 C featured a supercharger. Its output was nearly 128 hp with a single Zenith carburetor. Type 35 C won the French Grand Prix at Saint-Gaudens in 1928 and at Pau in 1930.

To carry on the beauty of this, FlatPyramid has developed a high-resolution 3-D model of the Bugatti Type 35 Vintage Race Car. This is one of the most detailed Bugatti you are going to find on the web. We hope that you like it.

Thank you for showing interest in the 3-D model of the Bugatti Type 35 Vintage Race Car. 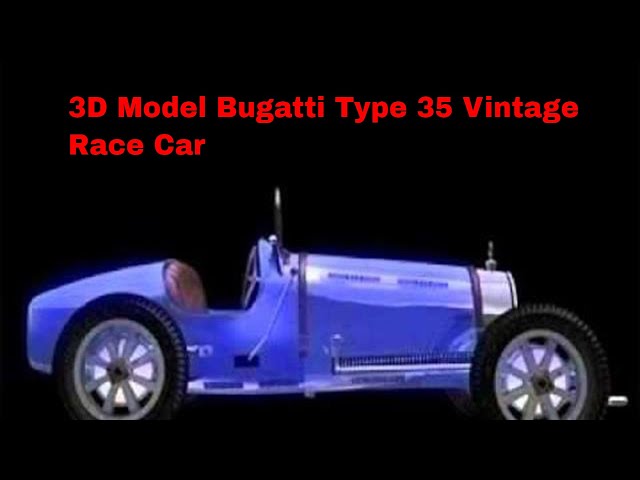