The Mercedes-Benz C Class is a line of compact executive cars produced by Daimler AG. Introduced in 1993 as a replacement for the 190 range, the C-class was the smallest model in the marque’s line-up until the W168 A-Class arrived in 1997. The C-Class built at Mercedes-Benz factories in Sindelfingen and Bremen, Germany as well as numerous satellite factories in other countries.

Though initially available as a sedan and a station wagon, the W203 series in 2000 debuted as a fastback coupe version that, when face lifted, became the Mercedes Benz CLC-Class. The CLC-Class remained in production until 2011 when new W204 C-Class coupe replaced it for the 2012 model year.

DaimlerChrysler introduced the W204 C-Class on 8 January 2007 and displayed it in the 2007 Geneva Auto Show. Sales started on 31 March 2007 in almost all European countries. The new family had an extended wheelbase and tracks, a stiffer body/shell and a design inspired by the W221 S-Class with some influences from the C219 CLS-Class. The C-Class received a facelift in 2011 for the 2012 model year including new LED taillights, a revised dashboard and instrument cluster layout, and a revised front fascia and headlights.

Thank you for showing interest in buying 3-D model of the 2008 Mercedes Benz C-Class. 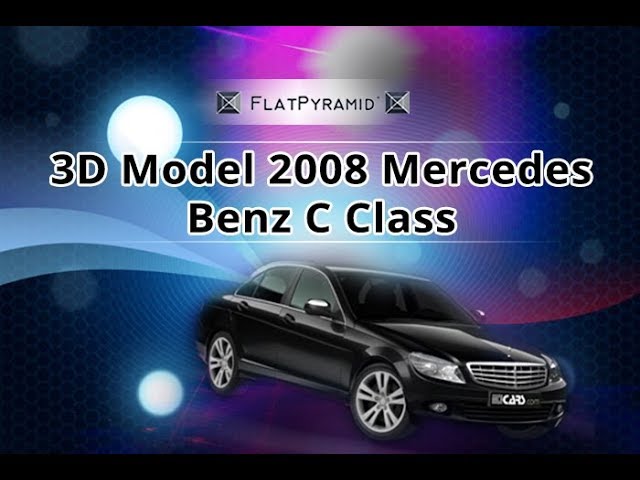