The car, named after the second letter of the Latin alphabet, is based on its first letter: at one time, the A-class became the ancestor of the Mercedes-Benz front-wheel-drive family, and already on its foundation, the Germans built all other deviations from the general line of the party. A key feature of these machines was the peculiar structure of the body with a sandwich floor: during a frontal strike, the engine went underground, without encroaching on the legs of the driver and his companion.

However, the sandwich did drop the butter down, leaving it on the floor of the story. And then the Germans set about implementing plan B: in the fall of 2011, they presented a new B-class at the Frankfurt Motor Show - in all its glory and without any sandwiches.

The interior design is in complete harmony with its functionality, and the only ergonomic joke - responsible for all and all left steering column switch - the Germans have long been turned into a tradition

By and large, it is completely unimportant from what dough the pie is made, if it looks salivary.B, which in the “Mercedes” alphabet can be transcribed as W246, turned out to be much more interesting than its predecessor with the W245 index - despite the fact that he had to perform in the same format. The concept remained unchanged: a high cabin with wheels at the corners, plus a small reserve for the hood. As a matter of fact, the cars of both generations can be easily described with the same words - they are assembled from separate elements, very similar to each other. The only fundamental difference comes down to the plasticity of the sidewalls: the former Bs did not have such spectacular curves on the sides, which start from the middle of the arches of the front wheels and, breaking at the level of the central pillar, soar to the rear lights.

But the devil, as you know, is in the details. The game of nuances completely changes the perception of the car: the difference between the old and the new car is striking! If the short-tailed W245 looked awkward and breezy, then the current W246 is nobility itself. A few millimeters slightly changed the proportions of a compact van: the overall length and rear overhang slightly increased, but the wheelbase decreased and the height decreased. The result - a completely different picture!

And, of course, designers have made their contribution. Headlights with linze pupils and luminous eyebrows; LED strips in the bumper; the chrome-plated threads with which the bumpers are hemmed - all this brings a gloss to the car. From the format on which the heavy print of family utility was originally placed, the designers squeezed the maximum. I will say more: this "Mercedes" is so good-looking that it can not be categorized uniquely. Personally, in the B-class I just see a beautiful car - to see “just a compact van” in this spectacular car, I lack consumer imagination.

Max Format:
Meshsmooth is applied so you can set the object resolution as you like. Just use the Named Selection Set meshsmoo

Max Format:
Meshsmooth is applied so you can set the object resolution as you like. Just use the Named Selection Set meshsmooth to select the SubD objects.

Obj Format:
In 3 different resolutions ranging from 150798 to 1056667 Polygons. Interior and exterior are saved separately so you can render the car also without the interior.
The lowest poly-version is the SubD. hull. So you can use it easily as SubD in MayaXSI or any Programms supporting SubD.

3ds Format:
In 3 different resolutions ranging from 197088 to 2009795 Polygons. Interior and exterior are saved separately so you can render the car also without the interior. 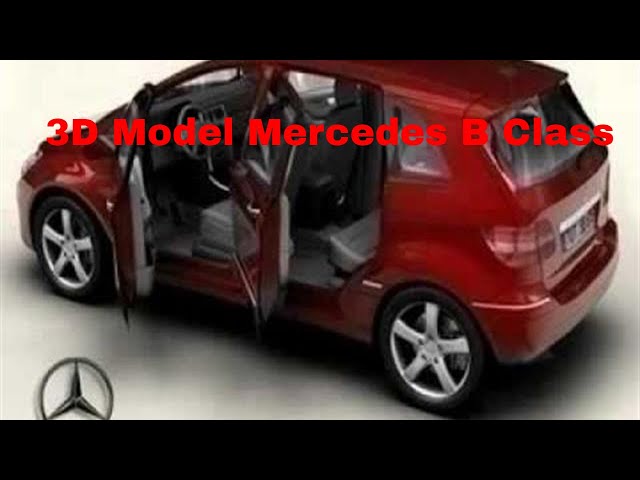