Mercedes-Benz R-class - a series of minivans of the premium segment, presented by the German concern Daimler AG in June 2005. It was first introduced as a concept Vision GST (Grand Sports Tourer) in 2002 at the Detroit Auto Show. The pre-production version was shown at the 2005 Frankfurt and New York Auto Shows.

The R-Class is the first full-size multi-purpose vehicle ever produced by Mercedes-Benz. The body shape of the series is considered a synthesis of a minivan, station wagon and SUV. The R-class is positioned by the manufacturer as a sports van. The car is offered in several variants of the wheelbase (classic and elongated).

The R-class is built on the W251 platform, and until 2015 it was assembled at the Tuscaloosa plant, Alabama (USA), after which production was transferred to the AM General plant in Indiana. In the Mercedes-Benz brand class hierarchy, the car is located between the M-class and the GL-class.

In the 2011 model year, the R-class was seriously updated. In 2013, car sales ceased in all countries except China, where there is still a small but steady demand for a car. Currently available only long-wheel drive version with all-wheel drive and six-cylinder engines (R 320 and R 400)

In January 2002, Mercedes-Benz introduced the concept car Vision GST (Grand Sports Tourer) at the Detroit Auto Show. This model, in the opinion of Daimler AG, is a solution for customers wishing to have a stylish and technologically sophisticated car that fits any life situations and events, be it family trips, sports trips or work assignments. The concept car was equipped with a 5.5-liter V8 engine from the 360-horsepower Mercedes-AMG unit, an all-wheel-drive electronics-controlled 4-ETS system, AIRMATIC air suspension and a new brake system with a high-pressure hydraulic pump (Sensotronic Brake Control (SBC), which uses large brake discs made of carbon-fiber-reinforced ceramic. A large electrochromic glass was installed on the roof, which can be darkened by pressing a button.

The exterior of the car was given special attention. The expressive arch of the roof of the concept car flows smoothly from front to rear, highlighting the length of the model. The front part of the body is made in a wedge-shaped, rapid form. Seen from the side, swinging back butterfly-type doors are visible, opening 90 degrees, making it easier for passengers to board. For the driver and passengers, individual seats are provided (in the amount of 6 seats) with servo steering and built-in safety belts. Wheel arches adorn the 22-inch alloy wheels.

Expensive and high-quality materials (wood, leather, and aluminum) were used for the interior trim. Rooflines, door panels and the central tunnel are equipped with a special lighting system. On the center console with two aluminum panels and tinted glass, there is a color monitor, a CD player, a radio and various controls.
Max Format:
Meshsmooth is applied so you can set the object resolution as you like. Just use the Named Selection Set meshsmooth to select the SubD objects.

Obj Format:
In 3 different resolutions ranging from 93511 to 961972 Polygons. Interior and exterior are saved separately so you can render the car also without the interior.
The lowest poly-version is the SubD. hull. So you can use it easily as SubD in MayaXSI or any Programms supporting SubD.

3ds Format:
In 3 different resolutions ranging from 181023 to 1919565 Polygons. Interior and exterior are saved separately so you can render the car also without the interior. 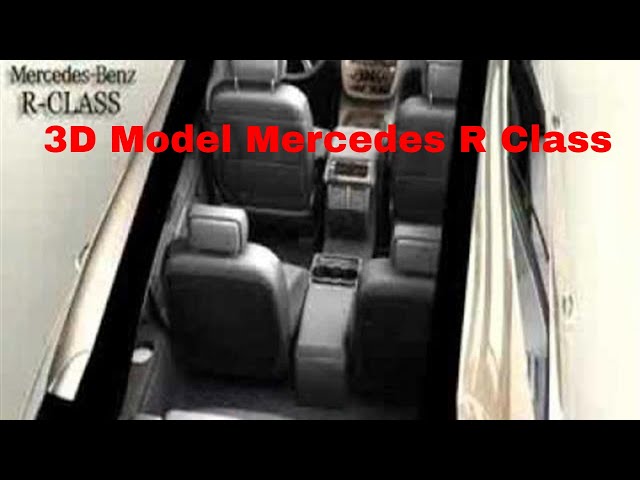