Trireme is a class of warships used by ancient civilizations of the Mediterranean, especially by the Phoenicians, ancient Greeks and ancient Romans.

Trireme received its name because of the three rows of oars, which are supposed to be placed one above the other in a checkerboard pattern; each paddle was driven by one person. The early triremes were the result of the evolution of the Unimir - the ancient warships with one row of oars, from 12 to 25 on each side, and the birem - warships with two rows of oars. It is possible that the Phoenicians were the first to build the trireme. Being the fastest and maneuverable warship, the trireme dominated the Mediterranean from the 7th to the 4th century BC. e., until there were larger warships - quadrireme and quinquirema. Trier played an important role in the Greek-Persian wars, in the formation of the maritime empire of Athens and its fall as a result of the Peloponnesian war.

Trireme had the following characteristics:

A displacement of 80–100 tons, a length of 30–40 meters, a width of 4–6 meters.
At the water level or above the water on the nose of the trireme there was a pointed beam (ram), which was made of iron or copper. A ram could be made of wood; in this case, it was iron bound. A straight or bent ram was used as an offensive weapon. Sometimes he was given the shape of an animal or bird. 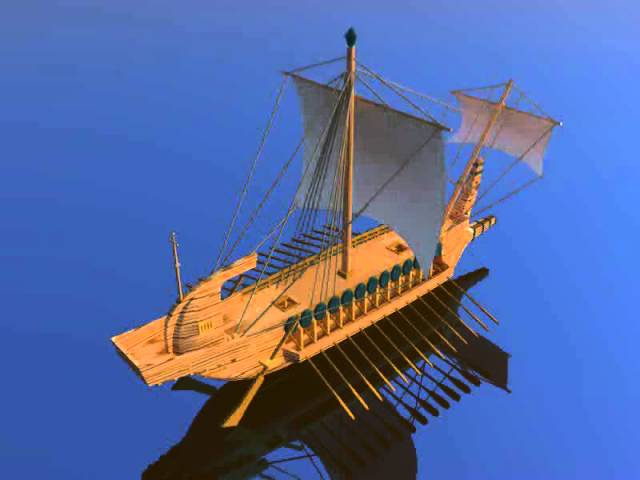