Only cinema4d R10 has materials and textures.
Other formats zip files have textures enclosed.
Polygons 32318
Vertices 30141
This model is only artistic representation of the subject matter. I made it for a truck magazine illustration.
The Mercedes-Benz Actros is a heavy duty truck introduced by Mercedes-Benz in 1996. It is normally used for long-distance haulage, heavy duty distribution haulage and construction haulage. It is available in weights starting at 18 tonnes[citation needed] and is powered by a V6 or V8 cylinder diesel engine with turbocharger and intercooler. Daimler Trucks/Lorries launched the version II of the Actros in 2002.
The second Actros generation comes with an electronic sequential gearbox that Mercedes-Benz has dubbed the "Telligent Gearbox". It pushes forward the principle used in some earlier Mercedes-Benz tractors; using the gearshift lever to command a pneumatically actuated system that changes the gears. The Telligent gearbox utilizes a computer, together with a load-sensing system on the fifth-wheel coupling, to estimate the proper gear that the truck must be in. For example, if you want to upshift, the computer estimates the load on the tractor and the current engine mode, and gives you the proper gear for decreasing engine RPM. On the other hand, if you want to downshift, the computer assumes you wish to overtake, and gives you a proper gear for acceleration.

Offering fifth wheel heights of less than 900 mm, the Actros Volumer can provide a simple load height of 3m within a 4m height limit, but with so many other benefits.

The OM 501 is a 12-liter V6 and has 310 HP to 480 HP outputs. The PLD (Pumpe Leitung Duese-German abbr) is the engine management system used by this engine. Contains single plug-in pumps for each fuel supply under pressure cylinder

FlatPyramid has created a 3D model of Mercedes Actros Megaspace that can be used for your closeups and visualizations where high-level detail is required. This model is only the subject matter’s artistic representation.

This model can also be used for a variety of purposes such as background for illustration, drawing, animated movies, projects, educational intent, filmmaking, and much more. We have tried our best to keep the model real and high detailed.
Download 3D models in various file formats from FlatPyramid at the best online price. Via our services, we are always ready to serve you. 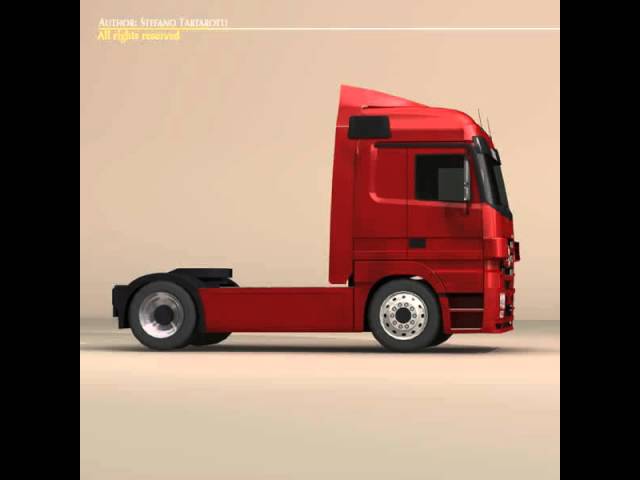