This is a package of 4 bicycle models, placed into separated folders with their matching textures. They have 209.220 polygons in total.

A bicycle, also called a bike or a cycle, is a human-powered or motor-powered, pedal-driven, single-track vehicle, having two wheels attached to a frame.

Bicycles were introduced in the late 19th century in Europe, and by the early 21st century, more than 1 billion were in continuation at a given time. These numbers far go beyond the number of cars, both in total and ranked by the number of individual models produced. They are the main means of transportation in many regions. They also provide a well-liked form of recreation, and have been adapted for use as children’s toys, general fitness, military and police applications, courier services, bicycle racing and bicycle stunts.

The fundamental shape and configuration of a typical erect or “safety bicycle”, has changed little since the first chain-driven model was developed around 1885. However, many details have been improved, particularly since the advent of modern materials and computer-aided design. These have allowed for a propagation of dedicated designs for many types of cycling.

At FlatPyramid, we have developed a 3D model of a 4 in 1 bicycle pack. It is available in 3ds format for commercial and non-commercial purposes. The model is very well detailed and high resolution. We hope you like it and appreciate our efforts.

In case of further inquiry, please feel free to contact us. We shall be very glad to help you out with all your concerns related to the model

Thanks for showing interest in the 3D model of a 4 in 1 bicycle pack. 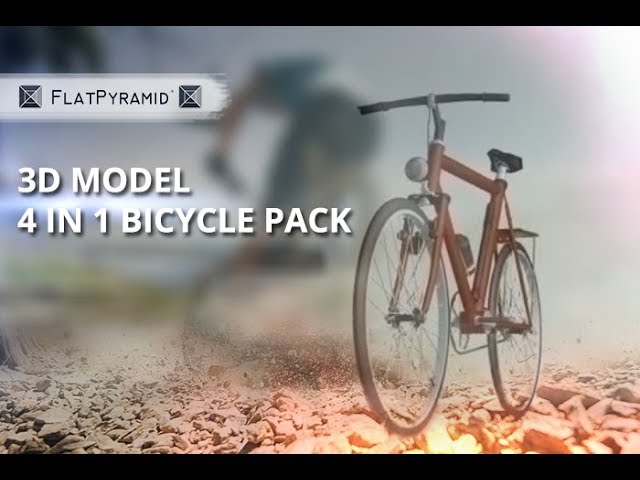