Here is a hot rodded early flathead V8 engine from a long-time American auto manufacturer founded by a guy named Henry. This motor is modeled after the “middle years” variation, 1938 through 1948, the 24-stud, 239 cubic inch version, this one with an Italian S.Co.T. blower, Stromberg 97 carbs and Barney Navarro‘s vintage cylinder heads (loosely interpreted). Great street rod motor nice detail externally, but without internal pieces dimensionally correct within reason, but not an exact reproduction.

Inline eight-cylinder engine - engine configuration with internal combustion of eight cylinders and pistons rotating one common crankshaft. Often referred to as I8 or L8 (Straight-8, In-Line-Eight). You can find such 3D models here too.

It is a fully balanced engine configuration. Compared to a number of six-cylinder engines, the I8 provides higher duty cycles as a whole, and, as a result, it works more smoothly under load and does not create additional vibrations in the vehicle's transmission at low revs.

Because of this, due to the ease of manufacture relative to the V8, in the past (the 1920s – 1950s), the series was often used on sports and expensive cars, especially in the United States. In some versions, almost all American cars of the middle and upper classes are produced, with the exception of the Cadillac, Mercury and Lincoln brands, which are traditionally used only in the V8. Buick models have I8 overhead valves, other brands use a scheme with lower valve access. 1923 Packard Straight Eight models. 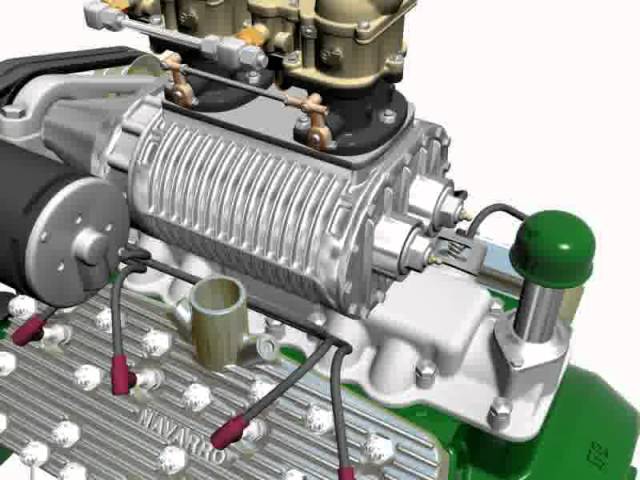