Chameleon (Chamaeleonidae) - the family of lizards. Has 2 subfamilies and 10 genera. The name "chameleon" comes from the name of a mythical being that changes its appearance.

On the head in many species, there are horn and skin gills (ridge, tubercles, sharpened horns). In males, horns and germs are much better developed than females. The head is shaft-shaped with a noticeably raised neck and more or less convex ridges. The chameleon's brains are like crocodiles and birds in their structure. Jaws are well developed, chameleons have different sized acrodont teeth.

Extremities are long, five-foot. The fingers are arranged by opposing groups of 2-3 in leather covers so that the foot and brush are converted into peculiar claws. Kegs are sharp. The tail is thick, tight, twisted with a spiral.

Chameleon's Vision. Eyes are large, rounded with thick, enlarged, circular eyelids, which are completely covered with scales, a small aperture for the pupil. Eye movements are independent of each other. One eye can look at 180 ° in a horizontal plane, and another - 90 ° in a vertical direction.

The tongue is long, round, equal to the length of the head and trunk took together (sometimes longer). Its end has the form of a cylinder. The middle part is hollow-like in the stem, very elastic, strongly stretched. The tongue is capable of being thrown far to capture the prey.

The coloration can change quickly. This is due to the structure of the skin. It's outer fibrous coating, in which chromatophores are present - branched cells with dark brown, reddish or yellowish pigment seeds. In the case of a reduction of processes of chromatophores, the pigmentation of the seeds is accumulated in the center of the cells and the skin looks whitish or yellow. When a dark pigment accumulates in the fibrous skin of the skin, it becomes dark, almost black. Shades are formed by a combination of pigments. Green tones arise in the case of refraction of sun rays in the upper skin of the skin, where many crystals of guanine. As a result, the color can quickly change from white to orange through yellow and green to purple, dark brown and black. This can happen with the skin on the whole body, as well as in separate parts. Changing the color occurs under the influence of temperature, light, moisture, thirst, hunger, fright, irritation.

A Chameleon, (also known as Chamaeleonidae), any of a group of primarily arboreal is best known for their ability to change body colour. It is basically a family of lizards. Other characteristics of chameleons include Seeing Ultraviolet Light, Independently Moving Eyes, Long, Sticky Tongues, Extremely Specialized Feet, Prehensile Tails, acrodont dentition (with teeth attached to the edge of the jaw) and atrophied venom glands that produce harmless trace amounts of venom.

Chameleons change their color very easily and quickly, and their eyes, which are on protruding cones, can move independently of one another. The tongue of a chameleon is a highly specialized tool used to catch insects from a long distance. Most types of chameleons can “shoot” their tongue one-and-a-half times the length of their body. In simple words a chameleon that is about 8FT long can extend its tongue about 12FT to catch the insects.

It is a high quality polygonal model, correctly scaled for an accurate representation of the original object. All colors can be easily modified. Model is fully textured with all materials applied. All textures and materials are included and mapped in every format. There is no special plugin needed to open scene.

If you are looking for a high definition 3D model with the detailed and fully textured interior, then your quest is completed here. You can also see various formats for rendering in the specifications lifting its value among the animators for the visualization process. 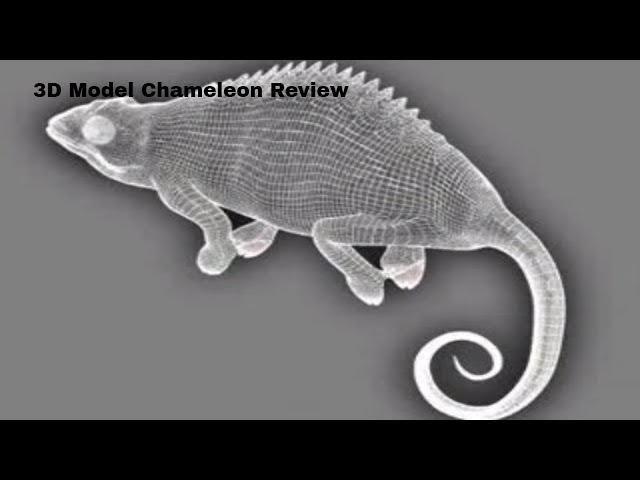