One of the most common MANPADS, which is in service with 30 states, as well as a number of national liberation movements and terrorist organizations. The number of Stinger missiles produced by all models exceeded 70,000.

BW Stinger Infantry 3D model based on MANPADS "Stinger" easy and relatively easy to operate, does not require routine maintenance. The ground-based anti-aircraft missile unit (section) consists of two military personnel: an arrow and a commander who serves as a target indicator for the gunner, reporting on the appearance of targets in the observed airspace sector, their course, direction and speed of flight, while simultaneously maintaining communication with neighboring units and the superior commander of the unit to which they are seconded and in whose interests they act. At the same time, one person is enough for normal operation of the complex. FIM-92B can produce bombardment of aircraft flying at an altitude of 180 to 3800 meters, the zone of destruction of the complex is up to 4500 meters. In addition to the portable launcher, the rocket can also be released from the container launcher of self-propelled SAM "Avenger" and "Laynbeker."

Let’s take a look into more details of this model of BW Stinger Infantry.

The BW stinger is a low altitude defense system used to protect from air attack & antitank. It’s a portable device that is to carry by a human being. Stinger is a counter-attack weapon & is effective against helicopters, unmanned aircraft, UAVs and observation airplanes.

The stinger weapon uses a reprogrammable processor that is dual-channel, infra-red (IR), ultraviolet (UV) seeker tracking system and propulsion navigation guidance system. Stinger also used IFF integral identifying system to identify the friendly aircraft. It’s a “fire and forgets” system, so once fired the gunner has no control over it. It also gives much time to the gunner to escape from the location & target other systems.

In the specification section, you can see various file formats for the BW Stinger Infantry model. You can use these file formats with various rendering software available.

Thanks for buying this 3D model of BW Stinger Infantry from the FlatPyramid. 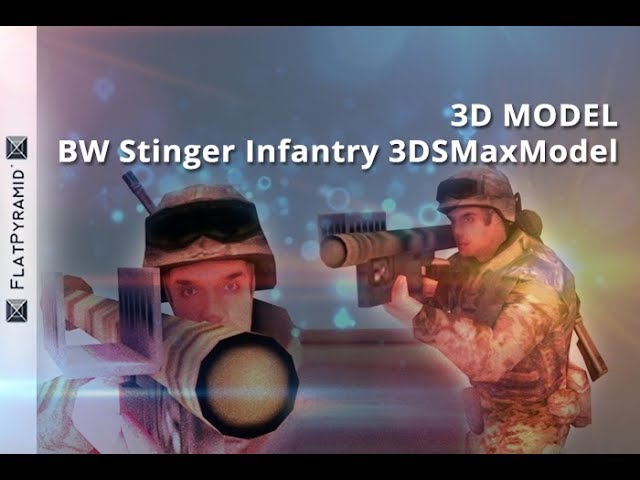