Features:
- Inside scene: - model - 12 textures
- All materials, bodypaint-textures and textures are included.
- No cleaning up necessary, just drop your models into the scene and start rendering.
- No special plugin needed to open scene.

Sd.Kfz. 250 was a light armoured halftrack, very similar in appearance to the larger Hanomag-designed SD.KFZ 251, and built by the DEMAG firm, for use by Nazi Germany in World War II.
The vehicle was used in a wide variety of roles throughout WW II. The basic troop carrier version was used as an armored personnel carrier for reconnaissance units, carrying scout sections. This basic variant usually mounted one or two MG 34 machineguns. Later variants carried 20 mm, 37 mm, and even 75 mm guns to support the more lightly armed versions.
The SD.KFZ 250/11, introduced in late 1942, replaced the SD.KFZ 250/10 as the platoon commanders vehicle. The 37mm Pak was replaced with the tapered bore 28mm Panzerbuchse 41. The vehicle carried a crew of 6. 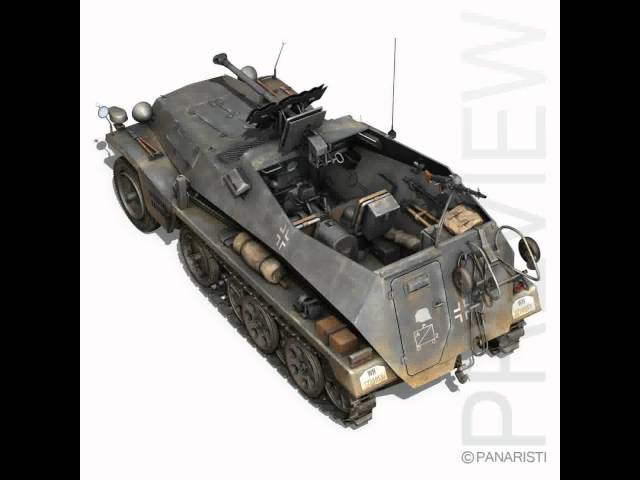