During World War II, the German army was the first in the world to use armored personnel carriers en masse and very effectively used them, forcing the Allies to develop similar vehicles, and then adopt their tactics. The main armored personnel carrier used by the Germans was the semi-tracked Sd Kfz 251, usually called the “Ganomag” (after the manufacturer’s name). It was used to transport infantry (motorized infantry) and heavy weapons (mortars, heavy machine guns, cannons, flamethrowers and rocket launchers), and sanitary, staff and communications vehicles were created at its base. Armored personnel carriers were in service with the German army throughout the Second World War and were used in all theaters of war. After the war, the modification of the Sd Kfz 251 - OT 810 was in service with the Czechoslovak army.

The Sd.Kfz. 251/9 also called “kanonenwagen”, and nicknamed “Stummel” was equipped with a short-barrel 75mm (2.95 in) howitzer, is a half-track German armored fighting vehicle designed by the Hanomag company used during the World War II.

Germany realized this fact very early in World War 2 and demonstrated use of support vehicles during their early Blitzkriegs. They had developed a great number of vehicles for differing purposes, and a very successful on was the Sd.Kfz. 251 half-track.

Production began in 1939, and the series is broken down into four types, from Ausf.A to D. according to the differences in design and its production period.

The first batch of 150 vehicles was delivered based on the Ausf C in June 1942. A strong design feature of the Sd.Kfz. 251 was the large track area, with the characteristic slack track design with no return rollers for the upper run of track. The Sd.Kfz. 251 also had the Schachtellaufwerk system of overlapping and interleaved main road wheels common to virtually all German halftracks of the period. The Sd.Kfz. 251 also had tank steering, whereby the normal steering wheel moved the front wheels, but after more turning of the steering wheel, the tracks are braked to cause turning, like on a tank.

The final D version Sd.Kfz. 251/1 Ausf.D appeared in 1943, and it became the most widely used model of the four versions. Powered by two Maybach HL42 machine guns plus automatic rifles and six cylinder engine, it had a top speed of 53km/h and a range of 300km. More than 10,000 of the D type half-track and its variants were produced during this period.

At FlatPyramid, we have created a high polygon 3D model of Sd.Kfz. 251/1 Ausf.D originally modeled in cinema4D (.Max) with high resolution and accurate dimensions which is maximally close to the original.

Thank you for showing interest in buying 3D model from FlatPyramid which are available to download for commercial, non-commercial, and editorial use. 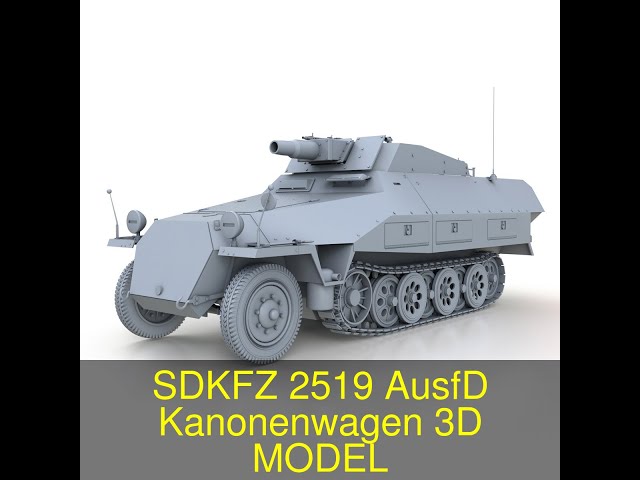