It was decided to use the same chassis as that of the HL kl.5 / H kl.6 (see Sd.Kfz.11 ) in which the characteristic inclined panels of this vehicle were welded and riveted. This type of Glacis inclined armor had been tested on the prototypes of the 7.5cm self-propelled gun Selbstfahrlafette L / 40.8. The engine, radiator, driver's compartment and rear cabin were armored; the nose had a shield of 14.5 mm with an inclination of 14 °, 10.80 mm and 80 ° on the engine cover, the side and rear panels 8 mm and 35 ° and 6 mm the ground.

It had four main models (AD), with many variants. The first two models were produced in small quantities. The variant C was produced in greater quantity, but it was a vehicle quite difficult to construct due to the inclined shield that it had. The variant D had a more simplified design and can be easily recognized by its back inclined in one piece (with flat doors).

The SDKFZ 251 half-truck was a World War II German armoured fighting vehicle designed by the Hanomag company. It was designed to transport the Panzer into battle. SdKfz 251s were the most widely produced German half-tracks of the war.

There were four main model modifications which formed the basis for at least 22 variants. The initial idea was for a vehicle that could be used to transport a single squad of 10 Panzers to the battlefield protected from enemy small arms fire.

The armour plates were designed to provide protection against standard rifle/machine gun bullets. The front-facing plates were 14.5 mm thick; the sides were steeply angled, V-shape 8mm thick plates. This level of armour provided protection against normal rifle AP round, which could pierce about 8mm of vertical armour.

The first two models were produced in very small numbers from 1939.

A strong design feature of the Sd.Kfz 251 was the large track area, with the slack track design with no return rollers for the upper run of track. It also had tank steering, whereby the normal steering wheel moved the front wheels.

At FlatPyramid, we have developed a 3-D model SDKFZ 251 – Ausf.D – Stuka zu Fuss. It is available in 3ds, c4d, fbx, lwo and other formats for commercial, non-commercial and editing purposes. It is one of the most detailed models you will find on the web. In case of any queries, please feel free to contact.

Thanks for showing interest in the 3-D model of the SDKFZ 251 – Ausf.D – Stuka zu Fuss. 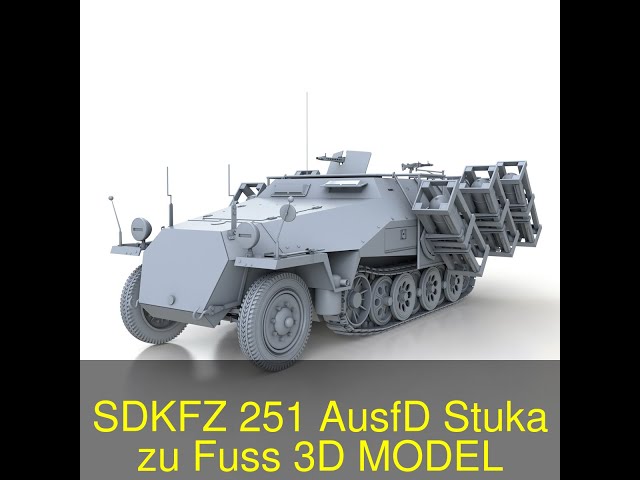