LiveJournal was started on April 15, 1999 by Brad Fitzpatrick as a way of keeping his high school friends updated on his activities. In January 2005, blogging software company Six Apart purchased Danga Interactive, the company that operated LiveJournal, from Fitzpatrick.

On December 2, 2007, Six Apart announced it was selling LiveJournal to SUP, a Russian media company that had been licensing the LiveJournal brand and software for use in Russia. The new owners unveiled a plan to upgrade the service, engage with the LiveJournal community and launch new products for advertisers. This work would be undertaken by the newly formed American-based company LiveJournal, Inc.

LiveJournal is a social community, founded by Brad Fitzpatrick on 15 April 1999, at the age of 19. Brad wanted to connect with his high school friends and wanted to keep them updated with his daily activities, so he came up with the idea of creating a virtual community, and build open-source server software.

Bradly Fitzpatrick was born on February 5, 1980, in Iowa, a middle eastern state in the United States. Brad started the LiveJournal out of a hobby in his college days, he continued to develop the software, it eventually became his full-time job and later he started a company. LiveJournal became a popular Russian social network where people could their blog, journal or diary.

Brad continued to run the company till the end of 2004, then in January 2005, he sold LiveJournal and his company Danga Interactive to software company Six Apart. Brad joined the
Six Apart as the chief architecture, He ended his journey in 2007 with the company in 2007 and moved to Google.

You can use this LiveJournal 3D Logo in your 3D model drawing, online projects, movies, games or any other projects to illustrate the logo of LiveJournal. The 3D model is designed with the quality finish and it is ready to render.

Download the LiveJournal 3D logo from FlatPyramid at the best price available on the internet. You can contact us at any time if you have any query regarding the product. 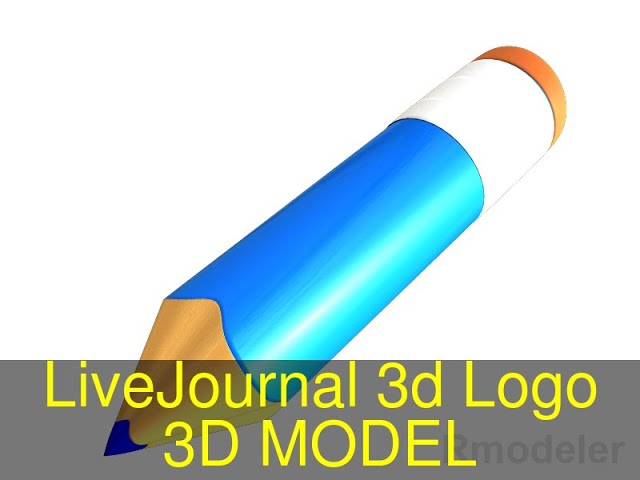