Table-Soccer 3D model board game based on football. The kicker is the person playing this game.

Table soccer is a table top game that is based on football. The aim of the game is to use the control knobs to move the ball into the opponent’s goal. There are no unified rules for playing the game. The rules can vary in different countries and even cities and sometimes between different clubs in the same city.

Patents for similar table games date back to as early as the 1890s in Europe. However, table soccer’s origin goes back to 1921, when Harold Searles Thornton from the United Kingdom patented the game.

He invented the game due to the popularity of football in Europe, which was spreading so rapidly Harold decided to make a game that people could play in their homes. Since most languages across the world call the real sport something resembling the word football. Harold decided to call his new creation “Foosball”. The games design inspiration came from a box of matches.

The game involves using figures mounted on rotating bars to kick a ball into the opposing goal. Table football tables can vary in size, but a typical table is about 120cm long and 61cm wide.

At FlatPyramid, we have developed a high resolution 3-D model of a Table Soccer. It is available in 3ds, max, obj formats for commercial, non-commercial and editing purposes. It is one of the most detailed models you can possibly come across on the web. In case of any queries, feel free to contact FlatPyramid.

Thanks for showing interest in buying the 3-D model of Table Soccer. 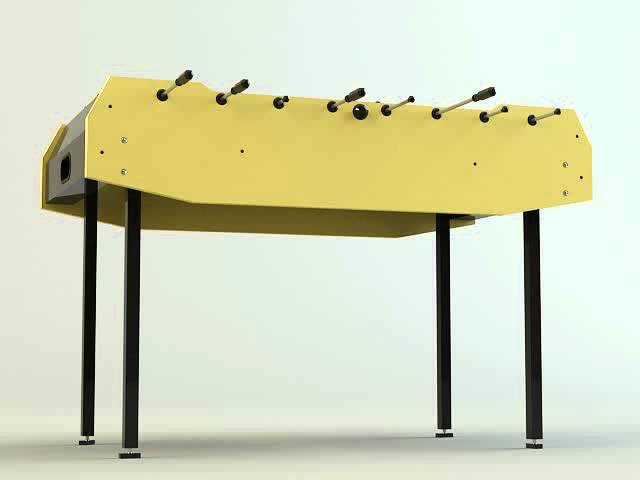