Detailed model of Agusta A129 international Mangusta (Mongoose) helicopter. Only bryce format has materials.
The A129 Mangusta Mongoose, armed with anti-tank and area-suppression weapons systems, is intended primarily as an attack helicopter to be used against armored targets. The aircraft can operate during day, night, and all-weather conditions. The A129 MANGUSTA is manufactured in Italy by the Agusta aircraft company. Agusta developed the A129 Mangusta anti-tank helicopter, the first attack helicopter to be designed and produced wholly in Europe. Italy is the only country with this helicopter in its inventory, with the Italian Army.
An escortscout version of the Mangusta is under development for deployment with airmobile units. The ship would also be armed for air-to-air combat. The A129 International, developed from A129 Mangusta.

The Agusta A129 Mangusta (Manufactured by AgustaWestland) is the first All European light observation and attack helicopter which can operate day and night and in all weather conditions. Its fuselage is highly angular and armored for ballistic protection. It is capable of Anti-armor, Air to Ground, anti fire attacks, Escort, Fire support and Close air support. It is powered by two Rolls Royce Gem 2 turbo shaft engines designed especially for the Agusta A129 Mangusta.

Agusta A129 Mangusta is equivalent to the American built AH-64 Apache helicopter in capabilities. It took its first flight on 11 September 1983 and has served in many combats since it came into service in 1991. It has a service ceiling of 4725 m (15,500 feet) and rate of climb is 10.2m/sec. It can fly around 320 miles on single a fueling at the speed of 174 Miles per hour.

The Agusta A129 Mangusta comes with four blades on the main rotor and two blades on the secondary rotor. It can fire 8 x AGM-114 Hellfire or BGM 71 TOW anti tank missiles or 4 to 8 Aim-92 Stinger or Mirstal anti-aircraft missiles. It can house two crew members, one pilot and one weapon systems operator.

The top specifications of the Agusta A129 Mangusta are as follows:

At FlatPyramid we have created realistic 3D model of Agusta A129 Mangusta originally in cinema4D with high accuracy equivalent to real product. Thank you for showing interest in buying 3D models from FlatPyramid which are available to download for commercial, non-commercial, and editorial use. 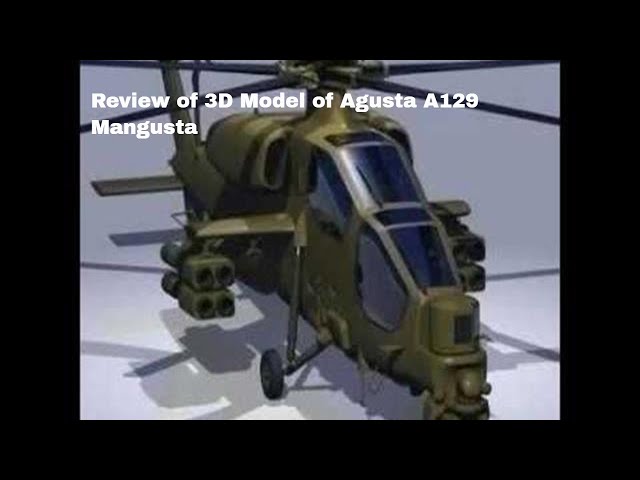