The Sd.Kfz. 251 half-track was aThe German armored combat vehicle built for the Second World War design by the Hanomag company. It/’s based on its earlier, unarmored Sd. Kfz. 11 vehicle. The German officers referred to them as SPW in their daily orders and memoirs.

This vehicle used to carry to the frontline a single squad of 10 panzergrenadiers from enemy small arms fire, and with some protection from artillery fire.

In the new addition, the standard mounting of at least one MG 34 or MG 42 machine gun allowed. The vehicle to provide suppressive fire for the rifle squad both while they dismounted and in combat.
This model armor plates designed to protect against standard rifle/ machine-gun bullets.

The front plates were 14.5 mm thick, the sides were steeply angled, 8 mm thick plates in V-shape.

Our 3d model looks like an original Hanomag Half-Truck. This is a Realistic 3d model with Texture. Real world scale and exact proportions. This model can also be used for a variety of purposes such as drawing, animated movies, projects, educational intent, filmmaking, and much more, the model is perfect for you.

Download the Hanomag Half-Truck 3D model from FlatPyramid at the best price available online. Feel free to contact us at any time, in case you have any queries regarding the product.

Come to us at FlatPyramid if you are searching for the same. We are providing the 3D models in various file formats that can be easily downloaded from the website.

Thank you for showing interest in buying the 3-D model of Hanomag Half-Truck. 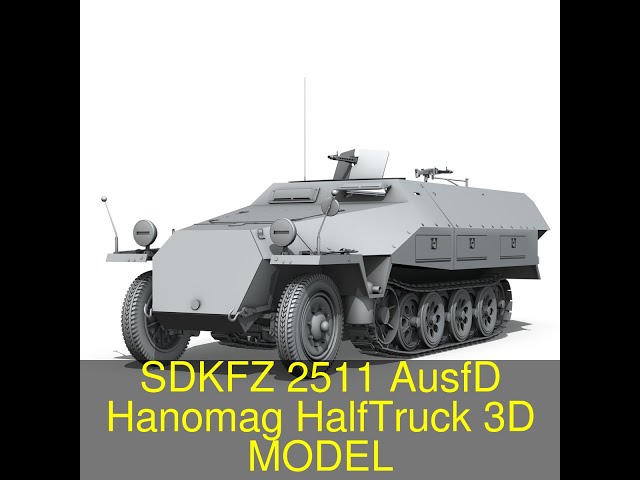