Features:- Inside scene: Model without textures
- No cleaning up necessary, just drop your models into the scene and start rendering.
- No special plugin needed to open scene.

This vehicle was a familiar sight, widely associated with the German infantry during all of World War Two. It began simply as an armored version of the Sd.Kfz.11 half-tracked artillery tractor. The half-track was one of the several solutions given to the problem of low off-road capabilities of trucks and associated “special purpose vehicles”. The SD.KFZ 251/22 – Ausf.D version was introduced in the spring of 1943 as a set of small changes in design for mass-production.The Sd.Kfz.251 was seen as a real improvement for infantry mobility, and added weight to the doctrine of using motorized infantry to accompany the tanks.

There were 23 official variants, and sundry unofficial variants- Sd.Kfz. 251/22 – Fitted with a 75 mm PaK 40 anti-tank gun. Probably too big a gun for the carriage, overloaded but effective, and the Yugoslav military was still using captured examples into the 1950s. The first Sd.Kfz 251/22 Pakwagen’s were delivered to four units in December 1944 – Grossdeutschland, 25th Panzer Division, 9th Panzer Division and 11th Panzer Division. WWII buffs will know that two of these units were on the Eastern Front with the others on the Western Front so there is plenty of scope for adding these into your German army no matter where it fights!

At FlatPyramid we have created 3D model of Sd.Kfz. 251/22 originally modelled in cinema4D (.c4D) along with other file formats like 3ds /.FBX/.OBJ/lwo/ with high resolution and accurate dimensions maximally close to the original.

Thank you for showing interest in buying 3D model at FlatPyramid. However, if you have any queries feel free to contact us at (310) 697-3740. 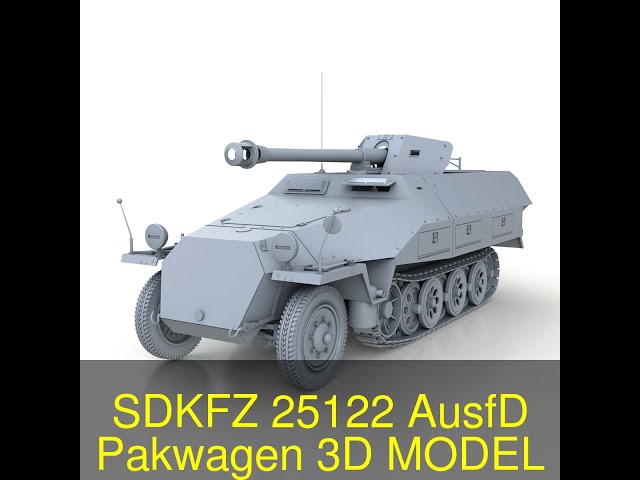