The Su-47 Berkut was a trial supersonic jet fighter developed by Sukhoi Aviation Corporation. A unique feature of the aircraft was its forward-swept wing that gave the aircraft excellent quickness and maneuverability.

While serial manufacture of the sort never materialized, the only aircraft produced served as a machinery demonstrator sample for variety of highly developed technologies. It was initially acknowledged as the S-37, Sukhoi redesignated its advanced test aircraft as the Su-47 in 2002. Authoritatively nicknamed Berkut, the Su-47 was originally built as Russia’s major testbed for composite materials and complicated fly-by-wire control systems.

The Su-47 is of comparable dimensions to previous large Sukhoi fighter, like the Su-35. To reduce development costs, the Su-47 borrowed the forward fuselage, vertical tails, and undercarriage of the Su-27 family.

Nevertheless, the aircraft includes an internal arms bay, and space set aside for advanced radar. The Su-47 has extremely high dexterity at subsonic speeds which enables the aircraft to regulate its angle of attack and its flight path varies rapidly while maintaining maneuverability in supersonic flight.

At FlatPyramid, we have developed a high-resolution 3D model of the Su-47 Berkut Game model. It is a very well defined model that is available in different formats for commercial, non commercial and editing purposes. The model is completely game ready and we hope that you like it.

For further inquiry, please feel free to contact us. We would be very pleased to help you.

Thank you for showing interest in the 3D model of the Su-47 Berkut Game model. 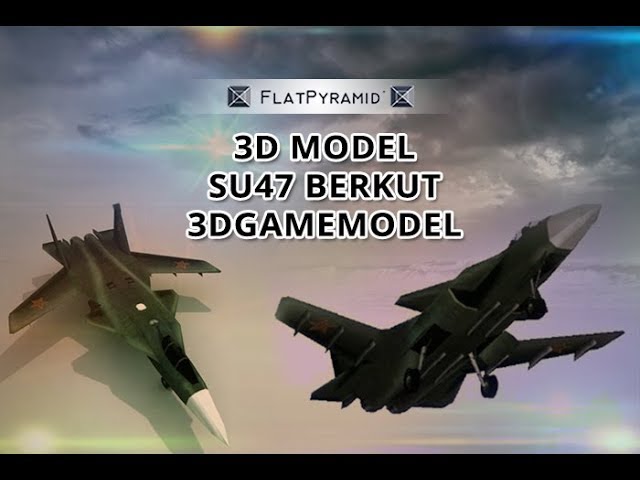