Model was made for use in architectural visualisations and animations and do not increase dramaticaly total polygon count in complete scene. It has xpresso in c4d format, that is ONLY animated, on door and steering wheel, handled by sliders. Wheels are revolving automaticaly according to speed and movement direction. Suspension is keeping wheels always on track. Just align to spline, define terrain and have fun Environment scene where the car is placed is not included About 90 polygons are quads. At format .3ds and .max all geometry is triangular. Jointed model means hierarchy of parents and children objects. If an OBJ file is available, it is not jointed and contains only default grey material without any other properties. Textures are included with all files.

For those that lived through that era, 1986 probably resonates as one of the most innovative and exciting years of the entire decade. General Motors was also pioneering new territory as they continued the evolution of their famous sports car. With the continual refinement of their L98 engine, a bigger focus on safety and security, and the development of many new functional and luxury features, the arrival of the 1986 Corvette carried with it the continuation of the spirit of innovation that had helped Corvette rise to become a world leader in the sports car market.

Of all the Corvettes built till 1985, approximately 7 percent had been stolen. Thus, recognizing a need of customers to make their cars more secure General Motors introduced a new security technology as a standard feature on all Corvettes “Vehicle Anti-Theft System” (VATS) an effective addition to the existing alarm system. The engine of a Corvette has always meant living up to high-performance aspirations.

This car has a 2 door convertible/cabriolet type body with a front positioned engine driving through the rear wheels. It’s powered courtesy of a naturally aspirated engine of 5.7 litre capacity. This unit features overhead valve valve gear, a 90 degree V 8 cylinder layout, and 2 valves per cylinder. It produces 235 bhp (238 PS/175 kW) of power at 4000 rpm, and maximum torque of 447 N-m (330 lb-ft/45.6 kgm) at 3200 rpm. The engine delivers its power through to the wheels via a 4 speed automatic transmission.

Follow us for high resolution and accurate 3d model based on a real car, created according to the original dimensions in several formats. At FlatPyramid, we have ready to use 3D model of Corvette Convertible (1986) car available for download. 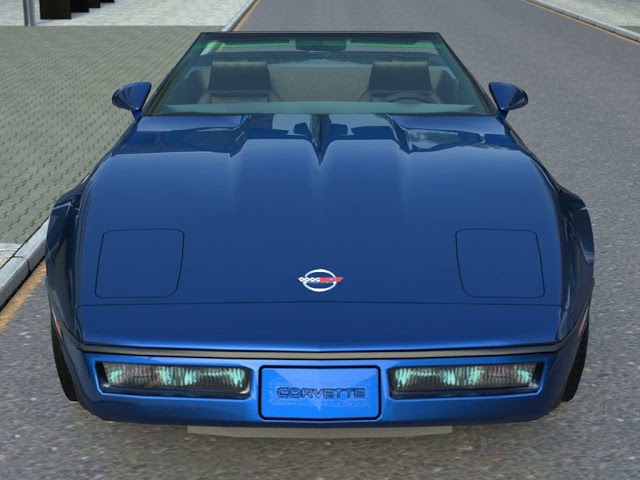