This model was made with 3ds Max 2010. It includes both standard and Brazil r/s materials in the .max file. It also includes all the the necessary maps for the bodywork (in 2 liveries) and for the dashboard with all indicators.

Most parts can be further smoothed if that is necessary. All objects are modeled from polygonal surfaces. Mostly quads are used in the surfaces.

The Kawasaki Z1000R is made by the Japanese automobile company Kawasaki. It was released in September 1976 as a 1977 model to replace the 1976 KZ900. It sports an inline four-cylinder engine and a 5-speed transmission, in a “one down four up” configuration. Producing about 90hp, it was one of the fastest motorcycles of the era.

The Z1000R has a heavier crankshaft for less engine vibration, smoother acceleration and a larger displacement. There were various configurations of specifications and assembly, such as having the choice between chain-drive and shaft-drive. The cruiser version Z1000R was assembled in Nebraska and sold in the United States and Canada.

Other styling characteristics are the head fairing, black engine finish, and the 4 into 1 exhaust system on the right side and cast wheels.

Following the success of the original Z1000, Kawasaki developed the “Z1000-R” as a new top model that would set standards in design and performance. This emphasized motorcycle with a fixed half-shell lining was only available with a metallic silver-blue paint. The design was well received by the customers of Kawasaki.
At FlatPyramid, we have developed a stunning 3D model of the Kawasaki Z1000R. It is available in different formats for various purposes. It can be used for difficult architectural visualizations, animations and gaming. All objects are modelled from polygon surfaces. Mostly, quads are used in the surfaces. We hope you like it. 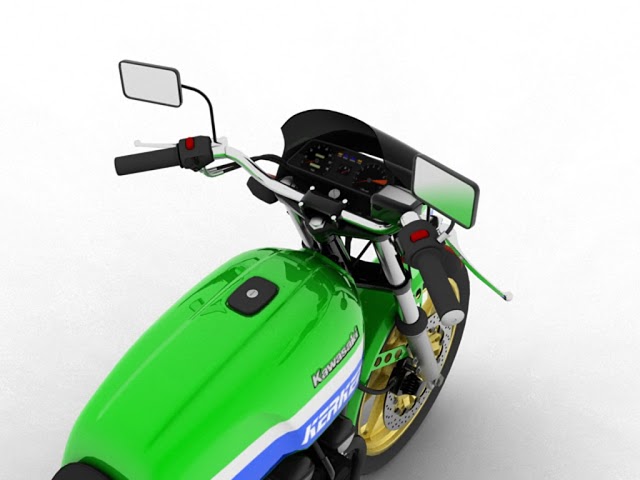