Made entirely in 3ds Max 2010, with polygonal surfaces, mostly quads.

The .MAX file comes with both Standard and Brazil r/s materials, the ones used for the previews above.

The bodywork paint is one single textureless material, whose color can be simply changed.

The speedometer is textured in great detail, and included in all file formats.

The geometry allows for extra MeshSmoothing in most objects in case this is required.

The Harley-Davidson WLA Bobber was produced to the United States Army specifications within the years during and around WW II. It was based on an existing civilian model, the WL, and is of the 45 solo type; it is called so due to its 45-cubic-inch engine displacement and single-rider design.

Harley began producing the WLA in small numbers in 1940, as a division of a general military expansion. The later entry of the United States into WW II saw significantly increased production.

Unusually, all the WLAs produced after Pearl Harbour, despite the real year, would be provided serial numbers indicating 1942 production.

The US Army used the motorcycle for police and escort work, courier duties and some scouting. The Army also used it to transport radio and radio suspension equipment. Allied motorcycles were almost never used as combat vehicles or for troop mobility.

At FlatPyramid, we have developed a stunning 3D model of the Harley-Davidson WLA Bobber 1945. It is available in different formats for various purposes. It can be used for difficult architectural visualizations, animations and gaming. The speedometer is textured in great detail and included in all file formats. All these textures are included. The geometry allows for extra Meshsmoothing in most objects in case this is required. We hope that you like it and appreciate our effort.

In case of further queries, please contact us. We shall be very pleased to help you with all your concerns related to the model.

Thanks for showing interest in the 3D model of the Harley-Davidson WLA Bobber 1945. 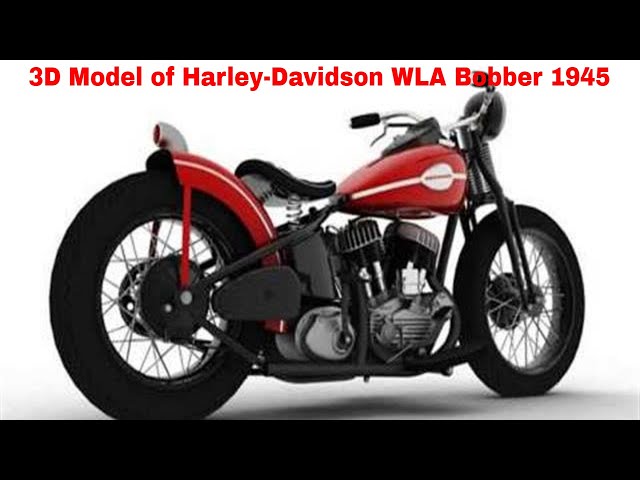