Unimog designates a range of multi purpose four wheel drive medium trucks produced by Mercedes-Benz, a division of Daimler AG. The name Unimog is pronounced in German and is an acronym for the German "UNIversal-MOtor-Gerät", Gerät being the German word for machine or device. They are built in the Mercedes truck plant in Wörth am Rhein in Germany.

Mercedes Unimog is a name synonymous to the high-quality German trucks. The Unimogs are classified as high mobility and capable of driving through any terrain. The design enables them to be a very good off-road ambulance. These ambulances equip a four stretcher patient litter system and room for one attendant. The litters can be transformed to let more people sit on the vehicle. The litters can also slide and fold for easy loading of the patients.

It sports a 6-cylinder diesel engine that produces a power of 130 hp. The gearbox has manual 8 forward gears and two reverse gears. It weighs around 2,250kgs. It was built with two wheelbases 3250mm (128 inches) and 3,850 mm (152 inches). It is a rear-wheel-drive vehicle and part-time four-wheel drive. Its average speed range is between 50-62 miles per hour. The brake system uses compressed air to activate the double hydraulic disc brakes.

The Unimog as an ambulance looks good and interesting. FlatPyramid has developed a 3D model of the Mercedes Benz Unimog U1300L Ambulance. We have developed this to be used in architectural visualizations, 3d animations, movies and video games. The design has been developed with much precision and clarity. Users can see the admirable detailing clearly. The model is made intending to give users near to original thrill.

Thanks for purchasing the 3D model of Mercedes Benz Unimog U 1300L Ambulance from FlatPyramid. 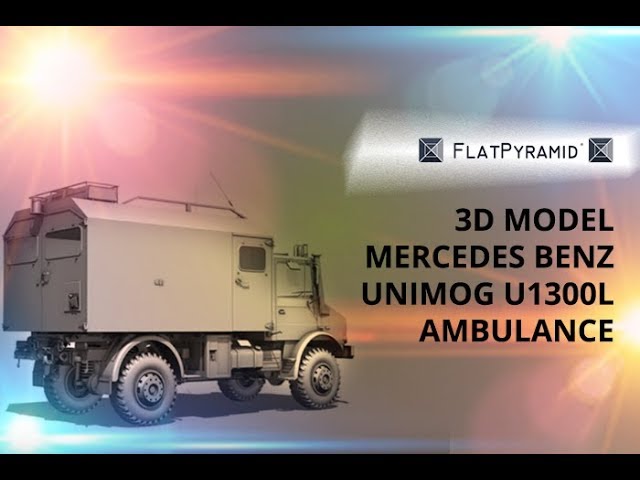