The model was made in 3DS Max, and is available in .3ds, .max, .c4d and .obj formats. All objects are modelled with polygonal surfaces.

Both standard and Brazil rs materials and bitmaps included. The model is quite detailed and it includes a fully modelled engine, levers and cables, gauges, throttle, fuel tank cap, lights, etc. The tyre treads are also modelled.

The scene contains a total of 97,000 faces. TurboSmooth or MeshSmooth can still be applied, in most parts of the model.

The Norton Commando story began when British motorcycle conglomerate Associated Motor Cycles, which counted among its brands AJS/Matchless, Francis-Barnett, James and Norton. It was a British Norton-Villiers motorcycle with an OHV pre-unit parallel-twin engine, produced by the Norton Motorcycle company. During its ten years of production, the Commando was popular all over the world. It won the Motor Cycle News “Machine of the Year” award for five successive years from 1968-1972. The Norton 850 cc MK3 Commando was launched in 1975 with an improved specification – electric starter, isolastic head steady for improved vibration absorption, left side gear change and right side foot brake to comply with United States vehicle regulations, and a rear disc brake. This model was featured with cast wheels, twin front disc brakes and a new tank and seat.

The Norton Commando 850 Mark III also came with an electric “starter.” The 828cc version which billed as 850 appeared in April 1973, achieved by increasing the bore from 73mm to 77mm. All 1974 Commandos were 850s, and 1975 saw the final version of the Commando, the Mark III. With disc brakes front and rear, the shift lever moved to the left to comply with U.S. homologation legislation.

This high resolution 3D model was initially made for use in difficult architectural visualizations and animations or and afterward changed over to all other 3D designs. Native available format are 3D Studios max scene is 3ds Max and is also available in .max, .c4d and .obj formats. This top notch Norton 850 Commando polygon 3D model is based on real and exact dimensions, point by point inside and completely finished. We offer this model to download for commercial, non-commercial, and editorial use.

Thank you for showing interest in buying 3D model at FlatPyramid. Hope you liked our product and have found your piece here. However, if you have any queries feel free to contact us at (310) 697-3740. 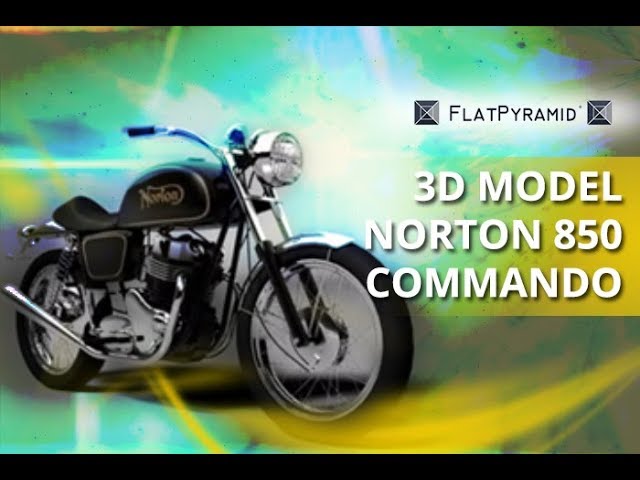