The model was made in 3DS Max, and is available in .3ds, .max, .c4d and .obj formats. All objects are modelled with polygonal surfaces.

BOTH Standard and Brazil rs materials included. The model is quite detailed and it includes a fully modelled engine, clutch and brake levers and cables, throttle, fuel tank caps, lights, chain, etc. The tyre treads are also modelled.

The scene contains a total of 138,214 faces. TurboSmooth or MeshSmooth can still be applied, for a higher number of polygons in most parts of the motorcycle.

Vincents were unique in many ways – in which intake and exhaust valves were very unusual. Extra long, they had two valve guides a piece, one down close to the port, and the other up top, above where the forked rocker arms actuated them. The hand-assembled engines were of unit construction and made extensive use of aluminum castings. And again, they were all black, except for a limited run of just 16 “White Lightnings”, which came without the black finish, similar to the Rapides. In fact, in 1948, a specially-tuned Black Shadow was the first production motorcycle to break the 150 mph-barrier on the Bonneville Salt Flats. This Vincent Black Shadow is not like the others. Over 60 years has passed since a Black Shadow was been made – with one exception, Classic Motorcycle Mecca’s 2007 Vincent Black Shadow. The motorcycle was completed at the start of 2007 and officially registered as a 2007 Vincent Black Shadow.

Our 3D artist has created 3D model of Vincent Black Shadow 1950 originally modeled in 3D Studio(.3ds) .c4d .obj and .max file formats with high resolution and accurate dimensions which is maximally close to the original.

Thank you for showing interest in buying 3D model at FlatPyramid. However, if you have any queries feel free to contact us at (310) 697-3740. 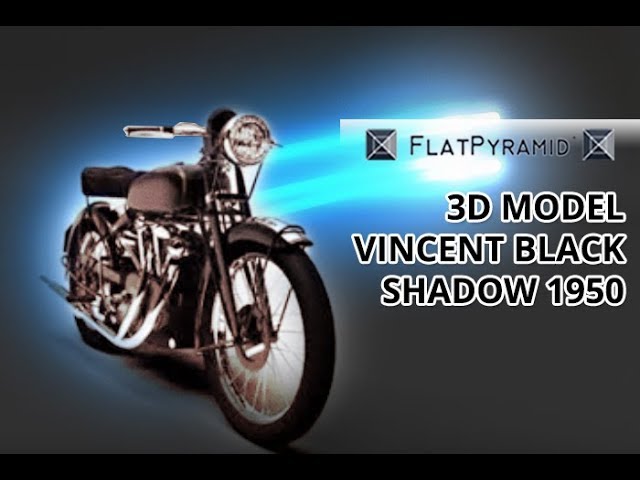