Detailed model of Leonardos Assault battleship
Rendered with C4D.
All materials and textures are included,but it could need some texture reassigning.Water material enclosed for c4d only.
Polygonal
Polygons 71274
Vertices 70269

Ship with sickle (Escorpio)
By means of a covering system, the ship can move and be manoeuvred without danger. The sickle is mounted on a wooden pole moved by a pinwheel and tears the sails of enemy ships with a 360-degree rotation.

Battleships are a combination of beauty and power that appeals to all of us. Leonardo, a global high-tech company and one of the key players in Aerospace, Defence and Security comes up with the technological evolution of Leonardo’s naval systems for maritime surveillance and security

As technology grows more advanced and new threats emerge on the battlefield, Leonardo DRS remains a leader in its industry by innovating and evolving integrated communication systems for the modernization of defense systems. Leonardo’s study of the motion of water led him to design machinery that utilized its force. Much of his work on hydraulics was for Ludovico il Moro. Leonardo wrote to Ludovico describing his skills and what he could build:

He kept notebooks full of ideas about architecture and technology of all kinds. He drew up plans for an assault battleship, a construction crane, a trench-digging machine, a revolving bridge and a deep-sea diving suit. In Leonardo’s notebooks there is an array of war machines that includes a vehicle to be propelled by two men powering crank shafts. Although the drawing itself looks quite finished, the mechanics were apparently not fully developed because, if built as drawn, the vehicle would never progress in a forward direction. He also designed a assault battleship with sickle mounted on a wooden pole moved by a pinwheel and tears the sails of enemy ships with a 360-degree rotation.

It has xpresso in c4d format and several format of this model is available to download for commercial, non-commercial, and editorial use. Download this 3d Model to put it into your scene, and use it for 3d visualization project, 3d rendering and other related to 3d design and structure. We also greatly appreciate you choosing our 3D models and hope they will be of useful to you. 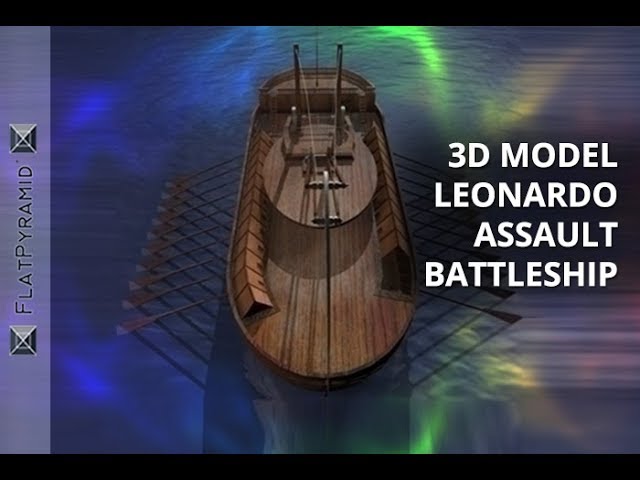