The original conception of the trains envisaged setting up a new German record with 2.5 passengers per meter of train length. After the DB board a 1: 1 model of the surveyed had planned passenger compartment, he criticized the high seat density, low luggage storage space and to close entry spaces especially in the bicycles. Also, the Customer Advisory Board of DB criticized in his view too narrow pitch, which was subsequently amended.

According to the original plans, the first-class end cars should accommodate 52 seats, the second-class end cars 63 seats, eight bicycle parking spaces, and two folding seats, In additional middle class second-class (powered and non-powered) each 100 seats should be accommodated. In the dining car of the seven-unit units were provided 29 seats in the first class and 17 seats in the restaurant; the dining cars of the ten-part units should have 23 first-class seats and 23 seats in the restaurant. The service trolleys of the dividers should have 47 second-class seats, six seats in a multifunction compartment and two wheelchair spaces; in which the Zehnteiler was in addition to an equally large multi-functional share 43 seats and three wheelchair spaces provided. The first-class mid-range coaches, which are only available in the ten-part configuration, have 66 seats (powered cars) and 69 seats (non-powered cars).

For the seven -part trains twelve toilets were planned, for the ten-part 18 (each middle and end cars of the second class two, in the end car of the first class two and a staff and a barrier-free toilet in the service car).  You should also get a "WC Broken" indicator.

The basic technical configuration should remain the same throughout the entire series. In the interior design differentiations were intended to distinguish between the types Intercity and Intercity Express, especially in the area of ​​the dining car .  The trains are to receive an on-board bistro and an on-board restaurant.

The Supervisory Board of Deutsche Bahn has decided on an increase in the ICE 4 order due to increased passenger number forecasts on 5 March 2013. The previously ten-part sets will be extended to twelve cars.  The total of 170 additional wagons increases the number of seats per train from 724 to 830. The technical requirements have been increased to TSI Class 1.  The maximum speed was thereby increased from 249 to 250 km / h. The interior was designed superior and should provide more space for luggage, the light color to adjust the time of day.  The corridors are to be enlarged.

The additional costs of the package were estimated at 600 million euro. The proportion of Bombardier's mind is 336 million euros.  The planned changes to the start of operation is delayed for the twelve-car trains for one year, for the seven-car trains for four years.

The number of seats was reduced from 499 to 456 for the divisors and the trains were not equipped for different power systems. The trains can no longer be used in the Netherlands.

The first series of 130 trainsets was to comprise 45 seven- and 85 twelve-unit trainsets. So far, however, only twelve-unit trainsets have been put into operation. They are to replace the Intercity sets with cars from the years 1971 to 1991. A registration for Germany and Austria for all ICE 4 as well as additionally for Switzerland for the twelve-part multiple units is planned.

The planned 59 sets of the second series should replace by 2025 today's ICE-1 and ICE-2 trains.  In the long-distance concept of Deutsche Bahn presented in March 2015, the procurement of this second series is not planned until 2030. The trains of the second series to be approved for Germany, Austria and Switzerland.  An authorization for France, Luxembourg, Italy, Poland, and the Czech Republic is provided as an option.

The first series from the framework contract, which ran until December 31, 2030, was retrieved with the signing of the contract, the procurement of the second series is firmly planned. The option for the third tranche can be redeemed at any time.

At the beginning of April 2017, the contract was revised again and the order was changed to 100 twelve and 19 seven-part units. This change was made in view of expected higher numbers of travelers.

In June 2018, DB's Supervisory Board is to decide whether to order additional ICE 4 multiple units.  In order to manage passenger growth beyond previous plans, 18 additional ICE 4 will be procured. 50 more ICE 4 to be expanded from 12 to 13 cars.  By this proposed amendment of a powered carriage 2nd class  90 additional seats to be created and the traction power of trains increased to ensure a trouble-free use on the new Cologne-Rhine / Main.

The thirteen-part units should u. a. reach a maximum speed of 265 km / h with a modified drive motor ratio.  This is to use reserves of the vehicle, 265 km / h is considered the highest speed that could reach the vehicle with its current state of technical development. The final decision is due in spring 2019.

In September 2018, funding was approved for the acquisition of an additional 18 divisors, seven fewer than in the original plan. The rest remained unchanged. after delivery of the 12-divider Delivery of the divider 13 is to begin the 2021st The delivery of the reordered screen dividers should take place from 2023 onwards. The total value of the contract amounts to 610 million euros, of which approximately one third is attributable to Bombardier. A total of 1,511 cars are ordered, from which 50 twelve-part and 50 thirteen-part and 37 seven-part trains are formed. The remaining two end cars serve as a reserve.

The ordered dividers - the number of which has been increased from 19 to 37 - will replace the ICE 2, which will be phased out from 2022 onwards.

Most parts of the model are high-resolution polygonal objects.
Some parts of the model have been created as SubDivision/MeshSmooth surface. This means using the 3dsMax or the Maya version you can change the resolution/smoothness of these surface very easy.
In 3dsMax and Maya 2013, the base version of the model which is not smoothed has of 6657933 polygons.

For other software packages, the models are available in 1 high polygon resolution suitable for close renderings. This version has 6909329 polygons. 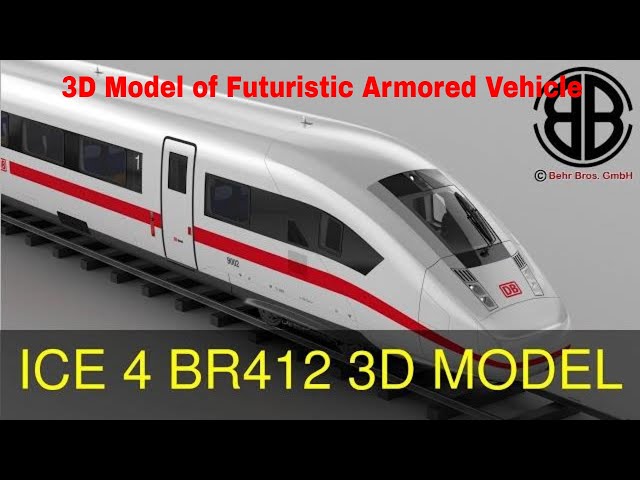